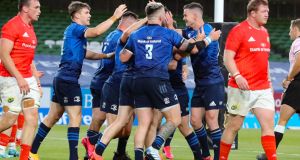 Normal service resumed. If only this defeat was that simple for Munster. Cruelly, they never got to unveil their newly acquired power game as a clinical Leinster piled on 14 points in the ‘championship minutes’ either side of half-time.

That would have been that if not for JJ Hanrahan lassoing every single point on offer. Except for a conversion when it mattered the most.

The return of rugby, fascinating to witness and all, will be remembered for the loss of RG Snyman after just seven minutes with a knee injury.

The sight of their hobbled African giant would have Munster folk whispering about Biddy Early and piseogs. With Joey Carbery’s ankle indefinitely broken, investment in Springbok beef was supposed to lessen the angst.

We had barely settled into the empty Aviva when the biggest man on planet rugby was gone. And he instantly knew it.

Is it too real for ya? Sport stripped down to its feral self and you can see the pain, you can hear the game throbbing along. It was fun to witness.

Munster ran out to silence, Leinster welcomed by Guns N’ Roses. The empty arena was anything but a jungle. Leinster’s pre match half lap always seemed to have one purpose: gee up the horsey set. Get the juices flowing among the ‘Heino brigade’.

But the Laighin Pit was at home. Not a sinner on Lansdowne road as we parked outside Number 62 for a temperature check.

Johnny Sexton completed the spring of the Havelock Square end - a peacock dance that sends a surge of energy through the blue fans - only this time, in this place, all they had to raise the tempo was Elbow’s Grounds for Divorce. Not ideal.

Nobody was complaining. The music would cease just before kick off, the quiet only punctuated by Donal Lenihan’s booming commentary and Sexton barking orders.

It felt like an audience to a private affair.

Sexton took a heavy blow from CJ Stander’s pointed charge in the fifth minute. The Leinster captain stumbled as he ran back into position but Professor John Ryan was satisfied following a brief inspection.

Munster were not so fortunate. Dave Kilcoyne was gone seconds before Snyman on his much anticipated debut. Jean Klen and Jeremy Loughman filled the gap (James Cronin had cried off pre match with a groin injury).

Snyman appeared to jar the joint falling awkwardly from a lineout.

Munster, to their credit, refused to let Leinster draw breath, with a succession of rumbles yielding a four man overlap for Andrew Conway to stroll over.

It took Damian de Allende 18 minutes to drop a shoulder into Sexton’s back. The 35 year old responded with a neat kick pass but the bounce took it away from Dave Kearney.

Referee Andrew Brace gave the Springbok centre a quick dressing down before awarding Leinster a penalty that allowed them crank up their maul. Cian Healy rose from beneath a rubble of bodies. De Allende can claim the try assist on his debut.

Munster continued to dominate territory with Stander arching over a blue ruck to earn Hanrahan a tricky shot at goal. The Rockwell old boy was on song.

Stander ensured that Sexton needed more repairs, this time on his right hand, after their second full frontal collision.

Jack Conan made a physical impression on return from his foot injury but Stander was on fire. His latest poach, over Jordan Larmour, offered Hanrahan a third look at goal.

Munster should have led 13-10 at the turn, especially after Peter O’Mahony stole another poor Kelleher lineout but Josh van der Flier ripped possession right back. Leinster threatened to go wide only for a clever grubber by Robbie Henshaw gifted Garry Ringrose a try that put them ahead for the first time.

Van der Flier - it must be noted somewhere - seems like an even better athlete than when we last saw his red helmet bobbing above the surface of these energy sapping games.

That’s what made the second half so compelling; the lack of distractions, of fake noise that they were pumping into your living rooms, made you remember just how tough this sport is to play.

The hits felt very real. Perhaps this was because you can hear the yelp of pain as the wind leaves the body of Peter O’Mahony and Larmour.

That they get up and move gingerly on makes you realise how chronically underpaid rugby players are considering the toll exacted from them physically.

James Lowe’s try on 51 minutes came from rapid passing by Luke McGrath and Sexton before a lovely draw and give from Ryan Baird. The winger cantered away but the score was born during the previous Munster possession and it had a feel of revenge for the South Africans trying to break you know who.

When Sexton and van der Flier held Chris Farrell up in the tackle, the turnover celebrations were aggressive and loud.

The walking wounded continued to multiply with Cian Healy, gripping his right arm, and Kleyn’s departure forcing Munster to replace the lock with a centre, Rory Scannell doing a shift at flanker.

Earls reminded everyone of his lethal ability to finish near the try line after a slick pass by Hanrahan on 64 minutes. The outhalf nailed the touch line conversion.

It wasn’t enough to reel in the champions as Ross Byrne slipped into the Sexton groove to keep a flawless evening alive for place kickers.

Back came Munster with Andrew Conway side stepping Lowe to give Hanrahan another touch line conversion to square the contest.

He missed. It didn’t reflect on his overall performance but when it mattered most, he couldn’t find the target.

The game effectively ended on a Dev Toner intercept. Far too real for ya.