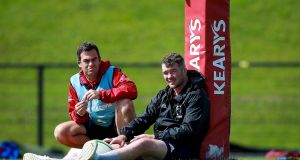 Munster coach Johann van Graan has been forced into making a number of changes up front as the province battle with an injury crisis at Thomond Park.

In total the South African has made five changes to his pack, with Jeremy Loughman, John Ryan, Fineen Wycherley, Chris Cloete and the fit again Tadhg Beirne all coming into the side.

Peter O’Mahony retains his place and captains the side from the backrow, with Billy Holland and Niall Scannell resuming in the secondrow and at hooker respectively.

Meanwhile Munster’s back line remains unchanged from the one which was edged out by Leinster in Dublin last time out, with the province needing a win to secure their place in the Pro14 semi-finals.

Ahead of Sunday’s match, Van Graan said: “We have training this afternoon and hopefully that goes well and all players selected come through that.

“Jack [O’Donoghue]came through his return to play protocols very well and he’s back training on the pitch, it’s great to have him back.

Meanwhile Connacht boss Andy Friend has stuck to his word and made 14 changes for Sunday’s fixture - the first ever meeting between the two provinces at Lansdowne Road.

Among the new faces is former Munster centre Sammy Arnold, who makes his Connacht debut against his former side along Tom Daly in midfield.

Colm de Buitléar makes a rare appearance on the wing, with Tiernan O’Halloran and Matt Healy adding experience to the back three. Caolin Blade and Conor Fitzgerald are named in the halfbacks.

Up front there is another debutant, with New Zealand’s Abraham Papali’i, a summer signing from the Bay of Plenty, starting at number eight. Conor Oliver and Eoghan Masterson - the only player to retain his place from last week - complete the backrow.

Quinn Roux has recovered from injury and he captains the side from secondrow alongside Niall Murray, with Paddy McAllister, Shane Delahunt and Dominic Robertson-McCoy named in the frontrow.

On Sunday’s clash with Munster, Friend said: “Our key objective in these two games has always been to give players some much needed game-time while putting in two positive performances which reflects the work they’ve put in as a squad these past few months. Thankfully we’ve so far managed to do that after last week’s excellent result. Now is an opportunity for a new group of players to impress so I’m looking forward to seeing them in action.

“Interpros against our neighbours Munster are always keenly contested and Sunday will be no different. They have a Guinness Pro14 semi-final to clinch but we’ll be looking to end our 2019-20 campaign on a high. We’ve also got two players making their Connacht debuts in Sammy Arnold and Abraham Papali’i so it’ll be a special occasion for them.”