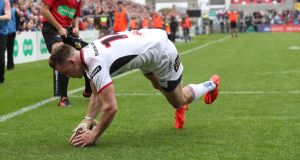 Ulster salvaged a troubled and largely forgettable season by securing the Guinness Pro14’s seventh and last place in next season’s European Champions Cup with a 35-17 win over the Ospreys in a playoff at the Kingspan Stadium yesterday.

Ulster had to do so with the injured Rory Best and Iain Henderson, and they also lost the departing fullback Charles Piutau in the warm-up while Tom O’Toole started at tighthead instead of Ross Kane in another late change. The retiring Ireland internationals Tommy Bowe, Andrew Trimble and Paul Marshall did not feature.

Tries by Craig Gilroy either side of half-time had Ulster 22-7 up entering the final quarter before a trademark intercept try by Jacob Stockdale put paid to an Ospreys’ comeback.

So, pending the announcement of Joe Schmidt’s squad of around 32 players in midweek for the three-Test tour to Australia, all that remains in the regular season is Leinster’s attempt at an historic European Champions Cup/Pro14 double when facing the reigning Pro14 champions Scarlets in the Aviva Stadium next Saturday (kick-off 6pm).

After Saturday’s absorbing 16-15 semi-final win over Munster at the RDS, Leo Cullen was optimistic that captain Isa Nacewa would be fit to play in his last game for the province before retirement, and that Johnny Sexton, Dan Leavy and Rob Kearney should all be fit again to return.

“They’ll all have a good chance,” said Cullen, laughing in acknowledgement that such pronouncements haven’t always proved accurate previously. But certainly Sexton himself seemed pretty confident in his half-time appearance on Sky Sports.

Cullen said Leinster would be better prepared for this final than was the case last week when tailoring their week after “celebrating appropriately last week. The lads had a good blow-out after the game and the next day. That’s good. They need to do it. They were always going to remember this game. They will remember this game forever.

“This was the talk leading into the game – good or bad. It was just making sure that they push-on and understand that it is a game they will always remember. Win or lose, they were going to remember this one.”

It will be a seventh meeting against the West Walian region in the space of 18 months, Scarlets having won last season’s then Pro12 semi-final 27-15 at the RDS before Leinster beat them 38-16 in the European Cup semi-finals at the Aviva four weeks ago.

So Scarlets will have a whiff of vengeance in their nostrils, and Cullen admitted: “I think we’ll have to tweak a few different things for sure.”

Asked if he was wary of Scarlets’ threat out wide if they get as much ball as Munster did, Cullen laughed and admitted: “Yeah, definitely. Yeah. I am very wary of that.”

Cullen also ventured that “a whole host of factors” will ensure Leinster have the requisite motivation. “It is a very ambitious group, and there’s the realisation that a lot of guys worked to get us into this position and didn’t get the chance to play in this game and some players finishing up and wanting to give them a good send off, Isa in particular and Jordi.

“It means a huge amount to the group because this group is never going to be the same again. They want to finish the season well. I’m sure Scarlets will be saying the same thing. Groups just break up. That’s just the reality of life in a professional team.

“It is just about finishing the job for us now. It’s been an amazing year. It’s come off the back of a lot of disappointment over the last couple of seasons. Everyone wants to work hard for another week to give people the ideal send-off. Sport is never really the perfect story, is it? But, we would ideally like to give people the perfect send-off.”

For Simon Zebo and others leaving Munster, there was no perfect send-off, and Johann van Graan said of their Racing-bound full-back: “I thought he made some big moments today. He’s obviously a world class player. He’s a player who has left a big mark, not only on Munster Rugby but Irish Rugby. At the end of the week on Friday, we will say goodbye to Zeebs. He’s a team man. We will miss his smile. He will be missed at Munster.”

Reflecting on another anti-climactic campaign, van Graan said: “Obviously we want to improve our skill set first. We want to build our squad and the most important thing if you look at it is we’ve got to play home semi-finals. I think that’s the biggest difference. You only have to look at Leinster, they’ve played two home semi-finals and that makes a massive difference. So we need to get to home semi-finals to give us a shot to get to a final and hopefully win it.”

Looking ahead captain Peter O’Mahony said: “We’ve got to be better. You look at the standard that Leinster are setting. We’ve got to improve across the board. There are a huge amount of positives to take out of what we have done over the last 12-18 months. But guys have got to understand that we have to take another step in a couple of aspects of our game.”

“The good thing is that a lot of them are stuff you can improve on, I wouldn’t say quite quickly but they can be improved on. The lads will always fight until the end, which is something you can’t change in someone, you know?”

As a one-point defeat indicates, Munster are not far away.

“You’re never far away,” said O’Mahony, “but the last few steps are the hardest ones to take and we have got to start to learn how to take them.”