Peter O’Mahony: Munster are capable of taking their final step

Despite pain of previous semi-final losses, flanker is focussed on beating Leinster 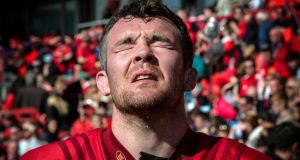 “To be involved in semi-finals and finals rugby is what you want to be doing at this time of the year.” Photograph: Billy Stickland/Inpho

Munster certainly can’t be accused of lacking persistence. They’ve had eight consecutive years of anti-climactic ends to their seasons, but here they are, banging on the semi-final door once against Leinster at the RDS on Saturday (kick-off 2.30pm).

Much has been made of Munster’s manifold near misses since they last won a trophy, the Pro12 in 2011, when they beat Leinster 19-9 in the final at Thomond Park a week after the latter’s remarkable comeback against Northampton in the European final in Cardiff.

Since then, Munster have reached the semi-finals of the Champions Cup or this tournament nine times, losing seven and twice reaching the final of the latter. They’ve endured some heavy beatings; 45-10 to the Ospreys in the semis in 2012, 31-13 to Glasgow and 46-22 to the Scarlets in the 2015 and 2017 finals, as well as convincing semi-final losses in Europe to Saracens two seasons ago and this season.

There’s also been some heartache, coming within a bounce of the ball in Ronan O’Gara’s last game against Clermont in Montpellier in 2013, and 16-15 defeats in this competition against both Glasgow in 2014 and Leinster last season.

Plenty of teams don’t have any rugby at this stage. It is great to be back in for what is the biggest week of the year.


Yet, as Peter O’Mahony notes, it’s better to be here than on the outside looking in, as 10 other teams are doing.

“To be involved in semi-finals and finals rugby is what you want to be doing at this time of the year. Plenty of teams don’t have any rugby at this stage. It is great to be back in for what is the biggest week of the year.”

With this comes fear, as both teams go into this latest rendezvous knowing that come 4.30pm on Saturday, for one of them the season will be over.

“It was the same deal for us against Treviso a couple of weeks ago. It’s exciting, it’s exhilarating, but you don’t want it to be your last one, so I suppose it’s scary at the same time. But look, these are the reasons you play the game, you want to be playing against the best at this time of the year, which we will be at the weekend.”

Now, in light of last Saturday’s defeat to Saracens, no less than Munster, it will also be Leinster’s last shot at silverware this season following their defeat by Saracens.

“I thought it was a great game of rugby,” says O’Mahony of the final in Newcastle. “I thought the intensity and the physicality was brutal. I thought Saracens probably played their best game of the year.”

“I didn’t think Leinster played badly, 10-0 up, I thought they were flying it but big moments in games, we’ve seen it a lot of times this year, they took their chances and to score 20 unanswered points against Leinster isn’t done by anyone. It’s a difficult thing to do and I thought they probably deserved it in the end.

“I know a lot of the guys personally,” O’Mahony says of Leinster. “They are winners more than anything else. They don’t like losing. They are very proud of their club and country and they want to win for both. I have had first-hand experience with a lot of these guys. They will certainly be hurting. They will use that as motivation again this week. They are successful people and a successful club, and they want to win silverware like we do. We will be expecting a massive performance from them.”

You’d imagine O’Mahony and co have been compelled to learn plenty of lessons from so many near misses, and one of these appears to be the need to think of performance first, and result second.

“As soon as you start looking at a result you are going to drop the ball. It will be firmly focused on our performance this week.”

While O’Mahony says Munster could take some comfort from beating Leinster at Thomond Park last December, “semi-final rugby is a different animal” he reasons, perhaps also mindful that Cian Healy and Tadhg Furlong were binned, and James Lowe sent off, in the first half-hour.

Hopefully we can start the game well and play some good rugby from the off, rather than us having to go behind and chase to play good rugby

Trailing 10-3 in last season’s semi-final and then, entering the last three minutes by 16-8, Munster threatened an unlikely comeback in the final throes of the game and akin to Conor Murray, O’Mahony believes they can take some encouragement from that performance.

“We certainly played well at times. A yellow card doesn’t help – Jean Kleyn. I think your discipline needs to be very good. You need to keep 15 guys on the pitch to be in with a shot. All of a sudden we were behind, and we played some good rugby. So hopefully we can start the game well and play some good rugby from the off, rather than us having to go behind and chase to play good rugby.”

You don’t doubt O’Mahony for a moment when he maintains that the departing assistant coaches, Jerry Flannery and Felix Jones, along with the rest of the coaching staff and players will be completely focused on preparing for Saturday’s semi-final.

Nor, come 2.30pm on Saturday, that it will require Munster’s best performance of the season if they are to win.