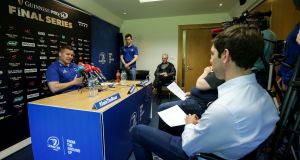 As the magnifying glass is passed over some of the areas in which Leinster were beaten by Saracens in last weekend’s Champions Cup final, management believe the squad, despite defeat, is as strong as it was 12 month ago when they were the European cup winners.

But there is change afoot. Losing Jordi Murphy and Isa Nacewa as well as the departure of Sean O’Brien to London Irish and prop Jack McGrath to Ulster when the season closes - and fullback Rob Kearney’s future is still undecided - transition continues to take place.

Scrum coach John Fogarty, also moving into the Irish set up after the Rugby World Cup, is another piece of the self adjusting Leinster jigsaw as the Pro14 semi-final with a Munster team desperate to win something draws closer.

“There’s always going to be players out the door and academy players in. Right now we’re not thinking like that,” said Fogarty. “The guys like James Ryan are young but they have a lot of experience under their belt and they’re unbelievably good at dealing with big wins and big losses.

“They’re desperate to find out why we’ve done well or why we haven’t done well. There’s such a different mindset to some of those younger guys. They’re such a huge asset to us. We’ve brought some players through this year that will be better again next year and that’s just the way this team is made up. That’s always going to be the way it is. Some players will leave.”

In a fast moving environment, Leinster can’t hesitate to move towards the semi-final in the sure knowledge Munster are smelling blood. Rarely will players go from a European final to a Pro14 semi-final over the course of days but most, with the exception of Ryan and Jordan Larmour who largely know only success, have become competent at cauterising wounds.

In that Fogarty speaks of a new breed of player, not quite Petri dish created in a laboratory but more able to pragmatically set out their week without the entanglement of the St James Park experience intruding at every move.

“They’re very specific in their chat when they come in to speak to us and they test us as coaches massively,” said Fogarty. “They will want to know exactly what we can do better.

“They’ll take it apart. They’re designed differently. When I was that age, I needed experience to become a good player. They’re getting much more strong at being forensic around their game and they understand a lot around what’s happening.”

One of the modern rugby designs Leinster will ignore is the big ticket buy in. Leo Cullen has said it is not their way and with younger players such as Max Deegan, Caelan Doris, Andrew Porter or Scott Penny in the academy they are not for moving.

Size also matters. There is a thought process that Saracens and before them the England team, were physically overwhelming. Maybe that’s over simplifying. Fogarty thinks it is.

Where Leinster careered off course was in their thinking, taking poor options at the wrong time and not seeing clearly under the pressure. In that thinking Fogarty sees an hour of the match that Leinster should be pleased about.

“If we had won that game would we be talking about a weakened squad?” he asks. “Zero to 60 minutes, that first-half, we were happy with how we went. We felt we were on top in that half. We go 10-nil up and there are opportunities either side of half-time to put ourselves in a better position. That’s how we felt.

“A little bit of execution, some calls, it didn’t happen. Really small things and the game changes slightly. We just need to be really clear in our minds. At times, when you are under pressure in that environment, you need to be really clear in your head and at times we threw a as we didn’t need to or we were a little bit loose. It’s those little small things that can make a difference. The initial feeling is that we got a little bit clouded in our heads.”

Saturday is a time to clear that away. Munster in the extended RDS and the bleeding from Saracens should have stopped. It’s the modern way.