England want Mark McCall - but does he want the England job? 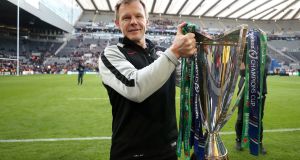 It has been a long time since the Rugby Football Union trusted anyone from a high-profile English club side to coach its national team. In theory the Premiership is its most productive source of track-suited talent but Twickenham usually prefers to look the other way. Eddie Jones, Stuart Lancaster, Martin Johnson, Brian Ashton, Andy Robinson … you have to go all the way back to Clive Woodward in 1997 to find someone who was employed within the domestic club game at the time of his appointment.

There is, of course, an argument that Test and club rugby are different animals requiring contrasting skill-sets. Setting out to win on a weekly basis is not the same as seeking to peak once every four years. The frenetic rhythm of club football and the longer-form international game sometimes feel as comparable as Madness and Mozart.

Occasionally, though, a conductor emerges with sufficient talent to transcend this cultural divide. To have masterminded three Champions Cup final successes in four years, as Mark McCall has done for Saracens, is one heck of a CV even before Saracens’ haul of Premiership titles is taken into account. In Newcastle over the weekend players of both sides queued up to confirm this year’s final felt as physically and mentally demanding as any Test match. As an ex-Ireland international himself with experience of coaching in three countries, McCall can hardly be considered a naive coaching ingénu.

It explains why, according to good sources, the RFU has earmarked McCall as its preferred candidate to succeed Jones. Frankly it is not the biggest surprise: why ignore the prime candidate sitting right under your nose? Not only does McCall command respect across the English game but he already has the ear of several key players – Owen Farrell, Maro Itoje, Billy and Mako Vunipola – who will be central to England’s medium-term fortunes. If he did take the job on Jones’s departure – whenever that turns out to be – it would be a far smoother transition than most.

The million-dollar question (no salary cap jokes, please) is whether McCall will ever be prised away from his existing role. Like Rob Baxter at Exeter he already has a job he loves, his family are happy and there are potentially a heap more trophies to be won. Last May he extended his contract with Saracens until the end of 2022 and he has repeatedly ruled himself out of England contention. “We have a good thing going on here and sometimes you have to realise when you have a good thing going.” Opting instead for a life of intense media scrutiny, political machinations and assorted other off-field hassles would be a major step.

He would almost certainly not bother if he was not allowed to hand-pick his own coaching team and run things entirely his way, tricky to do when England’s best players are not centrally contracted. His Saracens players, though, reckon he has all the credentials and would even rival Ireland’s outgoing Joe Schmidt as an all-seeing guru.

“Mark’s knowledge of every single aspect of the game is extraordinary,” Alex Goode, the European player of the year, said. “It’s overlooked sometimes but his eye for detail is incredible. He sees it all. Everyone talks about Joe Schmidt but he is remarkable in the way he sees everything and prepares a team. He’s always making sure we’re ready for every scenario and every situation.”

The Saracens’ scrumhalf Richard Wigglesworth paints a similar picture, describing a man who ideally prefers his players to shape their own destiny. “He is more than happy to listen and take information. He has numerous chats with individuals during the week, asking: ‘What do you think of this? How do you get this out?’ He is not a big guy for Churchill speeches, he is not telling you: ‘This is how this is going to happen.’ It all adds up to a very, very diligent man who leaves no stone unturned.”

Small wonder the RFU is increasingly interested. With Baxter also having indicated he still has unfinished business in Exeter, landing McCall would save the new RFU chief executive, Bill Sweeney, from having to take another expensive punt on someone with sketchy knowledge of the English game.

Appointing John Mitchell or Jim Mallinder – about to take charge of a shadow England XV to face the Barbarians – would involve a simpler rearrangement of the Twickenham furniture but neither of them has the 51-year-old McCall’s track record. Warren Gatland is now signed up for another Lions tour of duty, the soon-to-depart All Blacks coach, Steve Hansen, almost certainly has other fish to fry. If the softly spoken McCall expresses even a faint desire to coach England at the 2023 World Cup, the job will be his. - Guardian

1 LeBron James among those to slam Drew Brees’ anthem comments
2 How a GAA club sprang up in east Belfast over Sunday breakfast
3 GAA players spend just 2.5 seconds within 2m of each other during play
4 Connacht continue player hunt as six academy graduates promoted
5 Eoin Murchan on being the wrong player in the right place at the right time
Real news has value SUBSCRIBE