Ulster sign Kiwi back Matt Faddes from the Highlanders 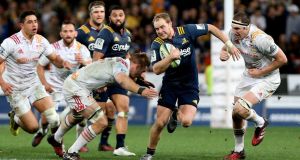 Ulster have confirmed the signing of Kiwi back Matt Faddes from Super Rugby side the Highlanders.

27-year-old Faddes can play across the backline, and will join the province ahead of next season.

He has scored 19 tries in 43 Super Rugby appearances, as well as representing New Zealand at Sevens level.

Ahead of his move to Belfast, Faddes said: “Both Georgie and I are looking forward to the experience of living and working in a new environment and the challenge that will provide.

“ It’s exciting to consider the next chapter of my rugby career. When I visited in 2016 [for the Barbarians], I was struck by the family, community feel to the club.”

On his new signing, Ulster boss Dan McFarland said: “Matt is a quality player who will bring a lot of experience, skill and creativity to our backline. He’s quick and has shown throughout his career the ability to beat defenders with his footwork and acceleration.

“His versatility will also be very important for us, meaning he is able to play various positions alongside our talented young backs.

“Matt is excited about moving over to Ireland and with his undoubted ability and strong worth ethic, I’m sure he’ll add a significant amount to our squad.”

Faddes follows Leinster’s Jack McGrath, Australia lock Sam Carter and prop Gareth Milasinovich in joining Ulster for next season, and McFarland has been pleased with the province’s recruitment.

He said: “Jonny [Petrie], Bryn [Cunningham]and I feel that this year’s recruitment process has been very productive and it’s encouraging that we are able to continue to attract players of this calibre to Ulster.

“The new arrivals will bolster our squad depth for next season and increase competition for places in key areas. This, coupled with the experience gained by so many of our young players this season, bodes well for us moving forward.”

1 Nicholas Quinn: ‘Swimming became how I dealt with grief’
2 A beautiful, happy accident - Moneyball is the best sports movie ever
3 Is it time for the New England Patriots to tear it down and start again?
4 James McClean still failing to learn his own online history lesson
5 Ian McKinley: ‘You do take for granted the simple things in life’
Real news has value SUBSCRIBE