Peter Dooley aiming for Ireland caps and beyond 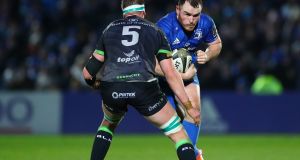 Peter Dooley chuckled on revealing that former Lions and Wales wing Shane Williams chose him as man of the match in Leinster’s victory over the Ospreys at the Gnoll, the first time that the prop has received that accolade in his 75-cap career for the province.

The 25-year-old from Birr has started 10 of 14 matches for Leinster this season, including appearing in three Heineken Champions Cup matches, more European games in a single campaign than at any stage since making his debut against Edinburgh in October, 2014.

A former Ireland underage international he’s enjoying a more consistent run of games this season and armed with a slight change in mindset and some extracurricular work with Leinster breakdown and contact coach Hugh Hogan, the benefits are visible in his all round game. A recent conversation with his father helped to clarify tweaks that he needed to make.

He explained: “I started the first four or five games (this season) and was just tipping along; it was frustrating. I came on in the home Champions Cup game against Treviso and it didn’t go particularly well and I was frustrated again. I just think that I put a lot of pressure on myself to perform. They joy went out of it for me for a while.

“I had this conversation with my dad and I went back to what I love doing, carrying the ball, running around and just playing rugby. When I was younger that’s why I enjoyed it so much. I threw the shackles off a little bit.

“The last few games, I think I went particularly well over the Christmas in the interprovincial matches and then the last few weeks have been good. Before matches I try and remind myself why I went well the previous week. It’s been about enjoying it and letting that pressure valve off.

“No, I didn’t (see) a sports psychologist. I just had a few talks with people in here. Hugh Hogan is the contact coach and we literally went through a few clips of my carries and stuff. I was trying to work out why these little lads were taking me down when I am twice the size of them and way more powerful. I think it is just a mindset, an attitude thing about not accepting contact.”

There is no doubt that a point of difference that Dooley brings to the Leinster team is his ball carrying ability. His rugby life began as a number eight and it wasn’t until he was 16 that he switched to the frontrow. “I always felt like I was a good ball carrier. When I went in at prop, I went into my shell a little to learn scrummaging and the carrying took a back seat.

“Playing with the lads if you carry well they will let you into the position to carry more often. Last year I was happy to be an inside or an outside latch, do more of the donkey work. Now I want to carry ball, make yards, (enjoy) the fun of the game and run over people.”

Cian Healy’s responsibilities with Ireland, and an injury to Ed Byrne, has seen Dooley shoulder much of the workload this season, a task he’s happy to discharge. His primary focus is on Leinster as he craves involvement on a consistent basis but particularly those big European games. Those are the stepping stones to a lifelong dream to represent Ireland at senior level.

He’s conscious of the impact young players like Caelan Doris and Ronan Kelleher made from the bench at Twickenham. “I look at Caelan and Ronan they made gainlines, straight away. It made such a difference to the Ireland gameplan. The ambition for me is to play for Ireland.”

He watched the game at Twickenham aware that the several players common to both teams will wear the blue of Leinster and red and black of Saracens in a European Cup quarter-final in April. “They’re key men, Farrell, Itoje, Jamie George and they brought that physicality in abundance at the weekend, something that we are going to have to prepare for.

“It’s going to be a tough challenge. The Irish boys will have been disappointed. I would have thought that they would have talked about it all week, the physicality. They were nearly a bit bullied. It’s frustrating that you talk about it all week and it doesn’t happen. James Ryan showed how physical he was, flying into things and leading by example.”

First though it’s the Glasgow Warriors at the RDS on Friday night as Leinster once again put their unbeaten record up for grabs. “Glasgow is a big test for us. They pride themselves on their physicality and brutality. That will start with us up front and hopefully be another one for me on Friday night to express myself.”