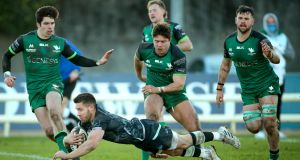 Rhys Webb dives to score a try during the Ospreys’ win over Connacht. Photograph: James Crombie/Inpho

Connacht’s woeful home record continued in the Galway Sportsground after failing to account for visitors Ospreys who grabbed a valuable bonus point win on Sunday.

The Welsh visitors were deserving victors, overturning a half-time deficit to take full points on an afternoon the home side failed to convert sufficient chances. Understandably coach And Friend was infuriated.

“No good, four on the bounce. We need to find an answer and we need to find it quickly, very disappointing,” he told reporters after the six point defeat.

“We said at half time that we had put ourselves in great position. The way we rallied at the tail end of the first half was impressive. We found our groove and to get the try, a yellow card and come 17-5 in front, that’s our game.”

Not so good, however, was the second half. Connacht failed to take advantage of the Osprey’s yellow card and then conceded a series of soft penalties.

“Really infuriating. I still thought with five minutes to go we had a chance, but we overran the footy and then had a knock-on. The momentum was with the Ospreys at the time, they were very buoyed by the previous 35 minutes.

“So you have to give credit to the Ospreys. They were good, but we knew it would be a dogged contest. But them coming here - we needed to be the better team. We will have to fight a lot harder and front up to what is going on, why we are not finishing those moments, how we build so much pressure and release it too easily, that is my biggest frustration.

“ There is a lot of good stuff, but how to maintain it - that is what missing and we need to find it quickly.”

Ospreys arrived with pedigree in a season that has blossomed under new head coach Toby Booth. Against Connacht they boasted six of the club’s seven players named in the Welsh Six Nations squad, and produced most of the attacking play in the opening half. Although they found themselves behind at the break, 17-5.

It had been a huge turnaround for the home side because aside from an early chance - which broke down when Conor Fitzgerald’s long looping pass to Alex Wootton was clearly forward - Connacht looked off the pace as Ospreys dominated both the set piece and in open play.

The visitors capitalised on good work at the breakdowns, utilising quick turnover possession. It set up the first try after seven minutes with Dan Lydiate, Owen Watkin, Matt Protheroe, and Justin Tiperic were all involved, before George North touched down for the opener.

However Andy Friend’s side finally got a foothold. A kick for touch provided the platform for Connacht to produce their best attack of the day. Following a drive from Boyle’s take, quick-thinking from Kieran Marmion swept the ball out of the backline, but Wootton was ultimately marshalled into touch by Owen Watkin. However, Fitzgerald subsequently landed a touchline penalty to open the home side’s tally.

Wootton did though make it count after 30 minutes thanks to a superb turnover when George North made a rare mistake. Fitzgerald was quickest to react, grabbing possession and speeding down the wing before offloading for Wootton to finish off. Fitzgerald, in only his fifth appearance this season and his first since the home match against Benetton, added the touchline conversion for a 17-5 lead.

However two tries within 10 minutes of the restart turned the game on its head. The first came from a scrum turnover after the restart, and the backs did the rest. Kieran Williams and Dan Evans added the momentum before North did all the damage, passing back inside to left wing Matt Protheroe who touched down with Myler converting.

Ospreys, having already scored six tries off mauls this season, then reverted to their pack, and the second arrived on 51 minutes from a penalty to touch with scrumhalf Rhys Webb scoring off the back of an unstoppable maul. Myler’s conversion put the visitors into the driving seat before Fitzgerald gave Connacht some hope with a 56th minute penalty to edge in front again.

However, it was almost inevitable Ospreys were not finished. They turned the screw at scrum time again for a penalty to touch, and their rolling maul was once again their weapon of choice. Superb work from the Connacht pack forced a five metre scrum, but again the visitors had all the momentum.

Two resets later and with a dominant scrum, Ospreys then opted to kick a penalty to touch. Tiperic secured with line-out catch and eventually their drive to the line was rewarded with Webb bagging his second and Myler adding the extras.

Replacements: M Burke for Buckley, 47 mins; B Aki for Robb, 40 mins; S Delahunt for Heffernan and C Blade for Marmion both 53 mins; C Kenny for Bealham, 61 mins; N Murray for Dillane, A Papali’i for Butler and M Healy for Wootton 68 mins.