No talk in Galway of Connacht's 58-year Belfast hoodoo 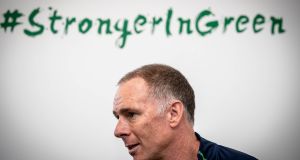 Connacht head coach Andy Friend: “Ulster are off the back of a performance we know they will be upset about, and they are going out to right that wrong.” Photograph: Morgan Treacy/Inpho

It is a 58-year hoodoo, but it is not to be mentioned at the Galway Sportsground this week.

One has to go back to 1960 to find Connacht’s last win in Belfast, and every season that statistic is trotted out in the hopes of it being an incentive. And every year since that 6-3 victory the weight of defeats is like a millstone. But not this time.

Coach Andy Friend, who makes his first visit to Kingspan Stadium on Friday night, says he is looking forward, not back.

“I reckon in the last 58 years there’s probably been 58 occasions when they have talked about that, and it hasn’t worked. So I thought, ‘bugger that, we will break the trend’, and we haven’t talked about it. When we win we will talk about it, without a doubt.

“We haven’t spoken to the boys about it at all. We have spoken as a coaching staff, and it’s like ‘same old, same old, let’s not talk about it’, so we haven’t.”

Friend’s motto instead is: don’t look in the rear vision mirror. Look out the front.

“We are not looking at the last 50 years. We are saying we have a brilliant chance to go to Belfast on Friday night, and take on what is going to be a really fired-up Ulster team given the result last weekend. The fact they are in front of a home crowd that we know is passionate, and we know they have a proud record there.

“So it is a great opportunity for us. Let’s do what we have to do, and after that we can talk about whether we made history or didn’t make history.”

He says this week’s theme is about being “clinical”.

“We know if we are not clinical, discipline wise, our skill set, our communication, and doing the simple things right, then we are going to get hurt. So our focus this week is about being clinical in our performance.

“Both teams are coming off six-day turnarounds. Both teams if they want to find reasons not to be energetic they could. But to me it’s the team that is mentally tough enough to deliver a really intensive 80-minute performance that will get the win.

“Ulster are off the back of a performance we know they will be upset about, and they are going out to right that wrong. But I know if we take the little learnings from the Leinster game and the same energy, if not a little more, we are going to give a really good account of ourselves.

“Away from home and in interpros you are not going to get many chances, and we probably had a couple of chances against Leinster, and that can be the difference in a game.

“So on Friday night if there’s an opportunity we have to take it. If we are the team with that ruthless and clinical desire then we have a fair chance of winning it.”

Friend is expected to make some changes with the likely return of captain Jarrad Butler and wing Matt Healy, but lock Gavin Thornbury, who was injured against Scarlets, is now expected to be out till November/December with an AC joint injury. Hooker and last weekend’s captain Dave Heffernan was due to have a scan on his ankle.

“It’s a very attritional competition, it’s full on, so you need depth in squad, you need the numbers there,” says Friend. “At the moment we have the Celtic Cup running, which is brilliant for the academy and next-tier players, but it stretches you.

“It means we have two games every weekend for six weeks. It’s great, and it is what we want, but you cop a few knocks in certain areas, and it stretches you. But, honestly, I am seeing this squad grow because they are having to grow.”