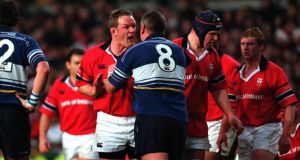 December 2001, the Celtic League final at Lansdowne Road, and all hell is about to break loose.

Munster are shredding the Leinster forwards. The ball bounces off Leo Cullen’s head into Jim Williams palm but he’s met by fellow Australian Keith Gleeson. A 22-year-old Paul O’Connell, Frankie Sheahan and Mick Galwey lump themselves over the ball. Alan Quinlan picks and turns to form a maul (you used to be allowed do that) as Marcus Horan and Peter Clohessy get stuck in. O’Connell peels left, Anthony Foley peels right as blue jerseys are scattered.

The maul collapses but before Williams can carry some more Eric Miller boots a prostrate Foley. He finds the sweet spot right in front Welsh referee Nigel Whitehouse who immediately blows his whistle. Galwey grabs Miller. Victor Costello grabs Galwey. The Claw arrives. Reggie Corrigan calms them down. Paul Wallace – Munster by birth, Leinster by the grace of employment – exchanges words with a strategically late arriving Ronan O’Gara while Quinlan, professional talker then and now, needs herding away by Galway.

Anarchy simmers as Whitehouse pulls a red card from his sock, “Six, away you go.”

There are only 25 minutes on the clock with Munster, already established as a European force, leading 7-6.

“The courage the players showed was incredible,” said Matt Williams way back when he was Leinster coach. “Everything was against us – a great side, a point against us, a man down and everyone saying we would crash. They didn’t crash, they stood and went for it and won a very famous victory.”

Denis Hickie, Gordon D’Arcy and Shane Horgan stretched their legs as it finished 24-20.

This wasn’t the start of anything for either province. The animosity was already embedded from club days when Shannon, Cork Con, Garryowen and Young Munster journeyed up to Templeville Road, Stradbrook, the Lansdowne back pitch and vice versa on Tom Clifford’s killing field, Temple Hill and Dooradoyle.

This spectacle merely provided confirmation that the tribes had amalgamated. The love triangle – Felipe, Rog, Leamy – was still a few seasons off.

October 2009, a sticky RDS night, and Munster are beaten all ends up. Trailing 20-0 with bubbling animosity and 27 minutes still to play, Simon McDowell is swallowed by a lineout when Denis Fogarty throws early. Ructions; Stan Wright and Denis Leamy exchange meaty but inaccurate punches and the officials have no idea what is really going on. Eoin Reddan, another blue-clad child of Limerick, natters in the referee’s ear.

“Number three and six, you are here to play rugby, leave the rest to me.”

Leamy appears to disagree with this plan. The crowd sense impending violence. O’Connell forms his maul but by then long Leinster levers hold firm. McDowell’s whistle gets a loud shrill when Leamy attempts to tear Nathan Hines’ head from his body. But something far worse has happened down below. When the steam evaporates dark blood pours from Cian Healy’s eye brow. The young prop needs serious attention but he’s up looking for any one of them, all of them will do.

O’Connell switches into Kofi Annan mode, “Are you allowed collapse the maul?”

“Keep him back,” McDowell instructs Jamie Heaslip as Professor Arthur Tanner finally gets hold of Healy to clean the mess. Cullen sarcastically claps his hands and gives the red captain a thumbs up.

The ref understandably missed the trampling but his linesman intervenes, “Three red stamp to the head.”

O’Connell leans down: “He has to go. Three blue.”

As the card comes out for John Hayes, O’Connell roars, “He was pulling the maul down. Ah ref, no way!” Leamy is less diplomatic, “That’s a joke.” A lovely Cork lilt chimes in, to further frazzle the Ulster official, as Johnny Sexton calmly lines up another three points.

“John’s an excellent character and the type of person he is, it’s very difficult to see him put himself in a position like that,” said Munster coach Tony McGahan before the disciplinary hearing. “We have our own views and John’s views on the situation, but there was certainly no intent there whatsoever. We’ve the best people on the job so we’ll let it play out.”

There will be more blood this Saturday, but really they love each other. The Bull’s ban was reduced by a week, for good behaviour, allowing the opposing props to pal up for Healy’s international debut against Australia.

Two years later in Thomond Park, a Keith Earls special and scrum-penalty-try captured Munster’s last trophy in a fine mugging the week after Leinster’s miracle match at the Millennium stadium.

Plenty of historical precedent then.