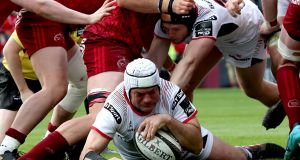 One game to go now in Ulster’s season from hell and yet they head towards Sunday’s crunch Champions Cup play-off against the Ospreys at the Kingspan Stadium with doubts surrounding skipper Rory Best’s fitness.

As body-blows go, the distinct possibility of losing Best – who, it is believed, damaged a hamstring in training – is clearly massive and particularly so as Iain Henderson had already been added to the missing list due to a knee problem picked up in Ulster’s last regular season game at Munster on the final Saturday in April.

The extent of the damage from Best’s issue is yet to be determined as is how this might affect the Ireland captain’s potential involvement in this summer’s tour to Australia, while Henderson is by no means nailed on for the trip either.

Best, who led Ireland to the Grand Slam in March, has played 10 games for his province this season in what has been an injury-blighted campaign when wearing an Ulster shirt though the 35-year-old has been involved in the four-game unbeaten run – including an 8-0 home win over the Ospreys early in the sequence – which ended the regular season for the northern province.

Ulster also have other injury concerns for Sunday’s high-stakes play-off to secure Champions Cup rugby for next season, as backrowers Matty Rea, Jean Deysel and Clive Ross are all believed to be sidelined.

The stakes are high come Sunday for what will be Jono Gibbes’s last game in charge which will also be the final outings for Charles Piutau and long-serving forward Robbie Diack.

Lose to the Ospreys and Ulster will exit Europe’s premier competition for the first time since its inception in season 1995-96 to taste life in the Challenge Cup.

And just to add some extra spice to this clash, as if it were needed, former Ulster assistant coach Allen Clarke is at the helm of the Welsh region and very eager to get one over on his former employers as well as keep the Ospreys in Europe’s upper tier.

“We’re a bit stretched,” said Gibbes of the injury situation, “but we’ve planned pretty well and used the three weeks [between games] as best we can”.

“But three weeks between [games] poses a bit of a challenge and we’ll see on Sunday how well we’ve managed it,” added the Kiwi who will hook up with Waikato once Ulster’s season is done.

As for his impending departure home, Gibbes brushed off his own personal take on the matter by focusing on the group benefits for beating the Ospreys.

“For me, yes, there is a positive consequence to winning this game and being in Europe [for next season].

“Yes, that would be great but what I would like is for this group to go out and show how hard they are prepared to work for each other, and with attitude and pride, to give a really good last impression to then hand over to next season.

“For me, that [outcome] would be pretty satisfying.”