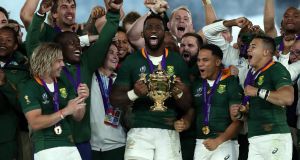 South Africa’s World Cup-winning squad are using the score from last year’s final in Japan to launch a campaign to feed people left destitute by the impact of the Covid-19 crisis.

The Springboks beat England 32-12 in last November’s final to win the World Cup for a third time and many of their top players have already launched their own initiatives to collect food for the hungry, notably captain Siya Kolisi.

In return, those who buy tickets have a chance to win a host of memorabilia from the tournament donated by the players – a total of 44 prizes (32 + 12).

“When I made the call for the squad to make donations, they were all in within a matter of hours – boots and all!” said coach Rassie Erasmus.

“We talked a bit last year [during the World Cup] about what pressure was – not having a job, having a family member murdered – and now this pandemic has put millions out of work and left as many struggling every day to put food on the table,” he added.

South Africa has enforced one of strictest lockdowns which has taken a heavy toll on the economy, already in recession before the virus struck, and increased daily hardships for millions of poor.

The country has recorded 286 coronavirus deaths, with 16,433 confirmed cases, the health ministry reported on Monday.