Jack Carty shines when he’s centre stage, he always has 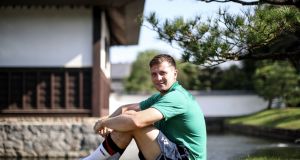 Growing up with Jack Carty there were a few signposts pointing to him becoming an Irish international. For starters, the ones he used as target practice on the way to Kiltoom stores. Even a walk to his local shop would require a rugby ball. With the road signs as targets, he’d enthusiastically tell us GAA heads about the different way the ball would spin or bounce depending on where he kicked, or how he held it.

In Roscommon he is regarded as one of those that got away. Irish soccer fans should have the same sentiments.

Looking back on many years of playing alongside and against him in both sports - for school, club and county - Jack was always the player you looked to when the game was in the melting pot. To grab an important goal, to force something to happen. He was very talented, but other players were more skilful. He was extremely competitive but others were stronger and more athletic. But few players, anywhere, ticked all the boxes that he did. And even fewer could match his determination.

He captained our Roscommon Under-16 team to the Ted Webb Connacht championship in 2008, he also captained our Athlone team through the Kennedy Cup where he caught the attention of soccer scouts from overseas. Jack was a centre half with a sharp defensive mind and a bite in the tackle. In GAA he was a very versatile player with excellent instincts and soft hands. What made Jack Carty though, as a Gaelic footballer and soccer player, was his heart.

It may seem strange to say now, but for me, rugby is the sport least suited to his natural skill set. But there’s no doubting it was always the game he loved most. Once he got the opening with the Irish team earlier this year I knew he would grasp it with both hands. He mightn’t have the almost robotic consistency his competitors for the 10 jersey possess, but he is a big game and big moments player. And that will be needed during this Rugby World Cup too.

Jack was the darling of the Marist College in Athlone. A school who at the time were placing a heavy emphasis on rugby, but had a strong pedigree in both soccer and GAA.

For big matches students would fill the sidelines and for most people in the school, Jack as a first year, was a surprise call up to the Junior Cup rugby squad. It was even more of a shock to see the young lad who a few months earlier had been avoiding being thrown in a bin, actually start the match. He held his own and a year later he was pulling the strings as the Marist won the competition.

But it wasn’t rugby where he made his name. We won a Leinster juvenile Gaelic football title with the Marist, still as first years, and I can still recall his midfield battle with John Heslin of St Mary’s of Mullingar in the semi-final. Heslin went on to play professionally in the AFL and has been Westmeath’s talisman for years.

But even when Jack came up against a more physical opponent, which was often the case in the middle third in GAA, he could win his duel with standout moments. A terrific catch, a solo score, a winning goal.

While he missed out on an All-Ireland club title with St Brigid’s in 2013, most of Jack’s time playing Gaelic football at club level was forgettable. He hated losing, but despite inspiring the odd upset, for the large part he had to carry weaker teams.

At county level though he was part of a golden generation of Roscommon players. A team who beat before and after them right through the development grades. As time went on size and physicality forced him from midfield into the half forward line. His last Gaelic football team to play for was the Roscommon minors in 2009. He came into our squad when his commitments with the Connacht academy allowed him to do so, and he started in an All-Ireland quarter-final even though it was his first year at the grade. We went on to win a Connacht title at Under-21 and reached an All-Ireland final, but by the age of 18 Jack was solely pursuing his rugby ambitions.

But he was progressing through the rugby ranks without setting the world on fire, at least not to the same extent as the likes of his club mates Robbie Henshaw, Danny Qualter and Shane Layden were.

Rugby was the only sport that ever presented Jack with major challenges and individual disappointments - right up to his first few years with the Connacht senior side he was being written off by everyone it seemed. Back then it looked like he’d made the wrong choice, that his heart had deceived his head.

At the Kennedy Cup, Jack had caught the eye of Southampton scouts and earned himself an international call up. But still rugby came first. Along with fellow Athlone lads Robbie Benson (now of Dundalk) and Tom O’Halloran, he represented Ireland against the Netherlands at the old St Mel’s Park. Jack played alongside Matt Doherty at centre back, Jeff Hendrick and Robbie Brady were also on those squads. But still, it was always going to be rugby.

A few years before winning a school’s soccer All-Ireland medal (Robbie Henshaw was also on that team) we’d lost a national final. His Irish coaches were there to observe and despite losing, he wouldn't let himself down. As we chased the game he’d follow the ball off the pitch, sprint after it and back. Possessed. And he’d have a child-like strop after any defeat too.

He’d bring the new things he learned to his local club team Hodson Bay. Collecting the kickout at the edge of the box, playing off his weaker foot. Hodson Bay weren’t even the best team in the Athlone league, but he never left them. That was Jack, he wasn’t interested in going up to a Dublin team and it wasn’t just his other sporting interests holding him back. His friends were important to him too, and still are.

He flew some out for his international debut in Rome. When he started university in Galway he brought some of them to live with him in an apartment owned by his parents.

His two brothers are good rugby players too. Ben was a late bloomer and is a former player of the year with their beloved Buccaneers club, while the youngest of them, Luke. was another excellent Gaelic footballer and is currently with the Connacht academy and last season was a regular with the Connacht Eagles. They’re all very close, likewise their older sisters, one of whom is married to Roscommon footballer Donal Shine. A GAA man to the core, now he doesn’t seem to miss a Connacht or Ireland match.

His father, Ted, is his biggest fan. No matter the sport he never missed a big match, and there’s been a lot of them. He also owns a very successful business - over 25 per cent of all pre-packed bacon and rashers sold in Ireland originate from Oliver Carty meats. But growing up there were never any airs and graces about a young lad who was mad for mischief and banter. And in Galway he wasted no time in securing his university degree, something that usually takes pro rugby players longer than others.

Watching Jack play rugby from a young age, and playing GAA and soccer with him through the same period, I always believed he’d have made it to the very top in the latter. He’d certainly be on a Roscommon senior squad if he’d opted for GAA.

Ultimately rugby is a far more physical, rigid and disciplined game. Risk-taking and emotive play complement more expressive sports. It’s taken him until the age of 27 to suddenly reach his goals, and to do so he’s had to develop consistency and the control that rugby requires.

Jack, though, is an individual who takes great confidence in being given an opportunity, and still thrives when centre stage. The build-up to Saturday’s match has and will be all about him but that’s when all Irish rugby fans should trust he will be at his determined best. When it’s less so that new found consistency will face its test. Japan first though.