Momentum with Ulster as they aim to make home advantage count 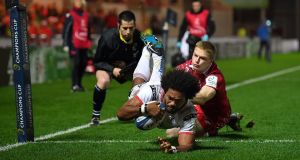 Akin to a two-legged tie, Dan McFarland will have been reminding his players all week that, despite last Friday’s heroics in Llanelli, the job is only half done.

Ulster have given themselves a serious chance of reaching the knockout stages of the Heineken Champions Cup for the first time in five seasons, but two of the usual requirements in achieving this are to complete a back-to-back at this pivotal point in the pool stages.

It is a commentary on last week’s performance that McFarland and his assistant coaches have named an unchanged team but last week’s celebrations at the full-time whistle will seem a little hollow if it is not backed up at home tonight.

There are plenty of warnings from recent history. Back in the 2012-13 season a week after Ulster won away to Harlequins they were beaten at home in the return match, and four seasons ago the Scarlets avenged a defeat at the Kingspan by winning a week later, albeit at home.

Asked how Ulster can replicate last week’s performance, McFarland said: “That’s a rally interesting one. The backs-to-backs themselves in the Heineken Champions Cup are an interesting dynamic, and when you win away from home in round three, there are a number of things we have to be careful of.

“It was interesting that there were five away victories last weekend, so winning at home is not a given right.”

The game will see Rory Best become Ulster’s most capped player in the European competition (72), moving one ahead of Andrew Trimble. Best will again captain the side and will pack down in the front row beside Marty Moore and the rapidly progressing Eric O’Sullivan, who made 22 tackles last week in an impressive 80-minute display.

Despite reaching last season’s semi-finals, since the start of the 2014/15 season, the Scarlets have won just two and drawn one of 13 away games, and picked up a losing bonus point on three occasions in 11 defeats. Furthermore, they have not won in Ireland in this competition since beating Ulster in January 2007.

Interestingly though, Wayne Pivac has named a strong side, which has been boosted by the return of Wales lock Jake Ball. After taking a blow to the head in the Guinness PRO14 defeat in Glasgow, Ball missed last week’s game.

Against that though, Rob Evans and James Davies have been ruled out and Leigh Halfpenny is still suffering concussion symptoms.

Wyn Jones comes into the frontrow, while Lewis Rawlins switches to the back row, where injuries to Davies, Aaron Shingler, Josh MacLeod, Ed Kennedy and Blade Thomson leave the Scarlets down to the bare bones, so much so that Pivac has had to name two secondrows, Tom Price and Josh Helps, among his replacements.

Even so, despite public declarations to the contrary, the Scarlets are perhaps still clinging to the hope that runners-up in the pool behind Racing is not beyond the bounds of possibility, and with that a very slim chance of reaching the quarter-finals.

Whatever about that, they are clearly on a mission of redemption.

“The good thing talking to the group this week is that everybody is determined to go out and build on last week’s performance, right the wrongs of their defence and put in a really good showing in Ulster – we are approaching it as a must-win game,” said Pivac.

“There was a missed conversion against Racing which was the difference between winning and losing, that is how tight that game was, and they are a good side. It sounds like excuses, but we have been on the wrong end of tight margins and it has cost us this season. We can’t take that back, but what we can do is keep working hard and look for the performances we desire to keep us going in the Pro14.

“That is a really exciting opportunity for us because two years ago we didn’t qualify for the quarter-finals of Europe and that actually aided us in the [Pro14] run-in.”

“When our players were getting rests and recovery other teams were going into another massive battle, that is the plus on the negative situation that we have found ourselves in, I guess.”

Nonetheless, the suspicion also lurks that not only is the momentum and home advantage with Ulster but that, akin to Gregor Townsend’s last season with Glasgow, a slight edge has been missing from the Scarlets along with some changes in personnel.

1 The Offload: Ireland are stuck in no man’s land
2 Nicky English: Galway and Waterford face battles with fatigue in All-Ireland semis
3 Davy Russell on neck injury: ‘it was a very close one and I dodged a bullet’
4 Every kind of wind imaginable was against Tipperary football - and they came through
5 Crowds of 4,000 to return to sporting events in England from next week
Real news has value SUBSCRIBE