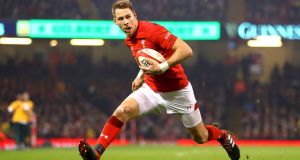 Wales could be without the likes of Liam Williams for their opening World Cup warm-up match against England at Twickenham on August 11th. Photograph: Warren Little/Getty

An insurance wrangle between World Rugby and the English Premiership is threatening to severely hamper World Cup preparations for nations such as Wales and Scotland who could be deprived of their players in the build-up to the tournament.

If the dispute is not resolved, the Guardian understands Premiership Rugby Limited (PRL) intends to prevent players from nations other than England joining their teams until mid-August, when the official Test window opens, only 35 days before the first match in Japan.

Wales would be without a host of leading internationals including Dan Biggar, Taulupe Faletau and Liam Williams for their planned altitude training camp in July as well as their opening World Cup warm-up match against England at Twickenham on August 11th.

Scotland – who could be denied early access to Stuart Hogg depending on the terms and start date of his Exeter contract – would be hit hard, having included nine Premiership players in their squad this autumn, while Italy and a host of tier two nations would also be disrupted. Samoa and Tonga are due to play each other on August 9th.

England are not affected as player release is governed by the £220m Professional Game Agreement signed by PRL and the RFU in 2016 while Sanzaar nations are helped by the fact that the truncated Rugby Championship takes place in an official Test window. Sanzaar players may find themselves in limbo between the end of the Rugby Championship and the start of the official World Cup window, however.

The sticking point for PRL is insurance for players covering injuries sustained while on international duty. Clubs are due compensation when injuries take place in official Test windows but they have grown weary with some unions who do not have adequate policies, leading to slow payments and it is understood the English Rugby Football Union has written to World Rugby in support of PRL on the matter.

A development is expected in the coming weeks and the Guardian understands World Rugby has agreed to make concessions in so far as raising the salary threshold below which clubs receive full compensation for an injured player from £225,000 to £350,000 but in the eyes of PRL, that apparently does not go far enough.

Before the 2015 World Cup, an agreement, facilitated by World Rugby, was reached for the early release of Premiership players but without further concessions, PRL is expected to strictly enforce the relevant Regulation 9 next year. It is the same regulation that left South Africa without Premiership players such as Faf de Klerk and Willie le Roux for their November fixture against England – a match that fell outside the official autumn window – and that caused a row between Wales and PRL over the summer.

Warren Gatland selected Josh Adams (Worcester), Tomas Francis (Exeter) and Luke Charteris (Bath) for their summer tour but PRL refused to release them for the fixture against South Africa in Washington DC in early June because it fell outside the official summer Test window. At the time Gatland said: “I understand completely what PRL are trying to do in the autumn when we organise a fourth international. They’re protecting their own competition. Players go back during the Six Nations down weeks and I understand that, too, but I just can’t understand why they would stop players from joining us a week or two early.

“The club season is finished and the players are going to be back with their clubs early, anyway. It’s a sad indictment on the politics of the game. I understand and accept completely the views on the other stuff, but this one just doesn’t make sense to me.”