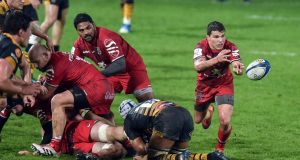 Toulouse moved a step closer to the Heineken Champions Cup quarter-finals with a 42-27 bonus-point victory over Wasps at the Stade Ernest-Wallon.

The four-time European champions retained top spot in Pool One with Wasps mathematically out of the equation.

Tries from Yoann Huget, Joe Tekori, Romain Ntamack and two from Antoine Dupont plus 17 points from the boot of Thomas Ramos were enough to secure the win.

The home side crossed for their first try within three minutes with Huget intercepting a loose pass from Le Roux in Wasps’ 22 to cross at the far left hand corner.

Wasps ground their way into the Toulouse half with Searle cutting the home side’s lead to two points with a successful penalty attempt.

Thomas Young sparked his side into life with a 30 metre break down the touchline before being brought down.

The ball was eventually recycled with Le Roux and Young showing some terrific handling to put Bassett over for their first try.

Toulouse hit straight back with the softest of offloads from Sofiane Guitoune releasing Tekori who sidestepped Le Roux to score.

The hosts continued to lay siege to the Wasps line as they looked to power their way over but the ball was recycled to Jerome Kaino who put Ntamack over with a nice pass.

Wasps kept coming back at their hosts with Elliot Daly breaking clear from his own 22.

The England international ran all the way to the Toulouse 22 before finding Le Roux on his shoulder with the Springbok running in unopposed.

Toulouse had a try disallowed just before the interval when Huget spilt the ball forward over the line after a neat pass from Ramos.

It took the home side a mere three minutes of the second half to secure the bonus point try with Huget hitting the perfect angle before his inside pass sent Dupont over.

But Searle dragged Wasps back into the game with his searing inside break releasing Le Roux on his outside who sent Neal flying over the try line.

The home side finally pulled clear of Wasps when an offload from Zak Holmes sent Ramos racing 30 metres up field before the fullback put Dupont over for his second.

Ramos capped a fine performance with a late penalty.

But it was an often close-run contest as Saracens’ 21-game run without defeat came under serious threat for large parts of the game.

England outhalf Owen Farrell’s second-half penalty double and a Jamie George try edged them home as they strengthened their grip on Pool Three.

Outhalf Gareth Anscombe kicked both conversions, yet the Blues are facing a pool-stage exit despite pushing Saracens hard just six days after suffering a 51-25 defeat against the same opponents at Allianz Park.

Saracens will secure their place in the last-eight if they beat struggling Lyon in France next month, with that game being followed by a home encounter against Glasgow.

Glasgow Warriors beat Lyon 21-10 in a game during which a strong bitter wind played a huge part but the home side maintained their hopes of qualification for the knockout stages from Pool Three.

Using the wind well Glasgow led 18-3 at the break thanks to a brace of tries from winger Niko Matawalu sandwiching a pair of penalties from Adam Hastings, who also converted the second try

Late pressure from Lyon produced a penalty from Jean-Marc Doussain, and with the wind they pulled back a try from Pierre-Louis Barassi which was converted by Doussain.

A penalty from Hastings, who was later subject to a straight arm to the head from lock Etienne Oosthuizen who was red carded by referee Ben Whitehouse, saw Glasgow home.

1 Simone Biles: ‘I’m not a little girl anymore, I feel like I’ve really found my voice’