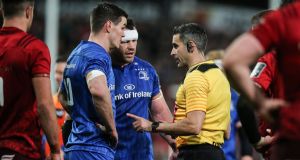 Leo Cullen had no qualms or quibbles with referee Frank Murphy sending off James Lowe and sin-binning Irish first-choice props Cian Healy and Tadhg Furlong in the first 32 minutes of their 26-17 defeat by Munster at Thomond Park.

Having only incurred one yellow card this season prior to this game, instead Leinster’s head coach accepted that their lack of discipline undid them in a first half in which they also conceded ten penalties.

“When you break apart the performance, the first half hour our discipline is clearly not good enough,” admitted Cullen.

“From that point on, we do a lot of good things and we stick in the game well. So, that’s really pleasing. I thought the desire and the spirit shown by the players is pleasing. Some younger players, we wanted to bring them off the bench to give them that exposure and I thought they handled things reasonably well.

“After all of the cards and particularly the red, when we’re numbers down we only concede one try and that’s an intercept when we’re five metres from the Munster line. It’s a good bit of play where they read it, get the intercept and go the length of the field.

“It is pleasing that we were able to shut Munster out for the majority of the game when we’re a man down. At one point we were down to 13. So, how the players dug in and adapted because in many ways when you’re down to 14 men the game-plan that you planned all week goes out the window to a certain extent.

“Even losing Dave Kearney in the warm-up, Noel (Reid) stepping in, the way we had to rejig with Rory on the wing... it was a day where we had to adapt. It wasn’t always perfect, but the players dug in for each other and that was the most pleasing part.”

Rather surprisingly, and even a little disappointingly, Johnny Sexton was replaced on the hour with the game still in the balance at 16-10 to the home side, and it transpired that this was a pre-ordained strategy.

“We wanted to get Ciaran (Frawley) the exposure to that game so that’s why we made that change at 60 minutes.”

By contrast, although he seemed to suggest that Leinster might have incurred greater sanction in that heated first-half, understandably Johann van Graan was altogether happier, not least with his side’s discipline.

Asked for his thoughts as Healy and Furlong were being brandished with yellow cards, van Graan said: “I think we stuck to our principles and I think we really stayed disciplined. I thought the referee was in a very difficult position. A sell-out Thomond Park and you want 15 versus 15.”

“I thought one or two of the earlier decisions could have gone maybe higher but all credit to the referee, I thought he kept his cool and I think it was four massive incidents in the first half and I thought eventually something had to give.

“I think it’s important, it doesn’t matter which colour is the jersey, I think player safety and player welfare is very important. You know, we lost a player tonight out of a game and our opponents lost it for only 10 minutes. All we can ask for is consistency like I’ve been asking for the last few weeks. I was really pleased about our discipline.”

The last comment was in reference to Chris Cloete’s departure after being caught high by Furlong, and the extent of his injury remained unclear.

“I just saw him inside. He has a very stiff neck. Nothing that I can say at this stage. He will go for scans. It could be serious but at least he has a smile on his face.”

There was no disguising Joey Carbery’s desire on the night he faced his former province at his new home ground, and aside from a couple of run-ins with Sexton, he put his off-day off the tee against Castres behind him by landing five kicks from five.

“I think Joey showed some real mental strength tonight. He missed one or two, two weeks ago. I thought he was excellent with his goal-kicking tonight. Obviously, for him personally, playing against his former team at a sold-out Thomond Park was a big moment. I’m very happy that he kicked it over and you need a quality goal kicker to beat the best and I thought he did that excellently tonight.”