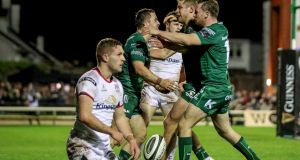 The New Year honours at the Galway Sportsground went to Connacht who claimed an important and deserved interprovincial victory over Ulster on Friday night.

In securing a seventh Pro14 victory, Andy Friend’s side maintained their recent momentum in the hunt for a semi-final berth, while also claiming a first double over Ulster in the professional era.

The conference system ensured there was much more at stake than local bragging rights, but knowing Ulster were going to throw everything at them, Connacht produced another spirited display after taking a 14-7 half-time lead.

It was error-stewn from both sides, but having secured an historic win in Kingspan earlier this season, Connacht did enough to even deny Dan McFarland’s side even a bonus point.

After a tense and often scrappy opening 10 minutes, Connacht were the first to establish field position, winning the opening penalty of the game through their scrum. From a penalty to touch, they made their first visit to the 22 count, man of the match Colby Fainga’a securing the lineout ball, and from the recycle, influential hooker Shane Delahunt touched down for the 13th minute try, which outhalf Jack Carty converted.

The home side was soon on the attack again, courtesy of Ulster’s Ian Nagle, who was a tad unfortunate to instinctively secure possession in an offside position. Ulster did well to thwart a series of stabs at the line before Connacht opted to scrum a third penalty in a five-minute period.

Ulster, under all sorts of pressure in the scrum, conceded, and with referee Marius Mitrea extending his arm yet again, scrumhalf Caolan Blade took advantage to feed the inrushing Bundee Aki, who cut through Johnny McPhillips to score from five metres out. Carty added the extras to give Andy Friend’s men a 14-0 lead after 22 minutes.

The visitors, however, finally gained some territorial control. Opting to kick a first penalty after 29 minutes to touch, they secured a second after Connacht attempted to pull down the maul. Connacht keep their line intact as the forwards twice attempted to get over the line, but eventually when the ball was sent wide, a cross field kick from McPhillips yielded Ulster’s first points.

With Connacht right wing Cian Kelleher failing to secure possession, Ballymena’s youngster Angus Kernohan, one of only two Ulster-born players in the starting XV, was able to get a hand on the bouncing ball for the try. Scrumhalf John Cooney, no stranger to the vagaries of the Sportground wind, knocked over the conversion to narrow the gap to 14-7.

Connacht were quick off the mark after the restart, capitalising on an Ulster error, and from Gavin Thornbury’s lineout catch on the 10-metre line, Blade opted to go blind before Carty sent the ball out to Godwin on the wing who chipped over Henry Speight. It enabled the Connacht outhalf to race through to grab possession before sending Blade through for Connacht’s third try.

Carty again converted, but missed a penalty minutes later as the momentum continued to swing between College Road and Bohermore ends. An injury to Henry Speight necessitated a rearranged Ulster backline, with John Cooney taking over at outhalf and replacement Peter Nelson moving to the wing, but it did not stop them from regaining control.

It got even worse for Connacht when replacement Ultan Dillane, only just on the field, was yellow carded, having been deemed to have taken out the support player in the line-out, and the result was an immediate try for Jordi Murphy as they marched the home side over the line for a second try after 67 minutes to narrow the gap to 21-12, Cooney missing the conversion.

However Connacht saw out the game on the attack, and with Bundee Aki once again leading by example, Connacht provided the sell-out crowd of 8,129 with good reason to celebrate the New Year.