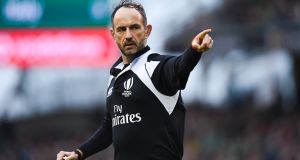 Romain Poite has been appointed to referee Leinster’s European Champions Cup semi-final against the Scarlets at the Aviva Stadium on Saturday week.

The appointments were announced on Wednesday following a meeting of EPCR’s selection committee which is chaired by their head of match officials, Joel Jutge.

The 42 year-old Poite was officiating when Leinster beat Northampton in the 2011 final in Cardiff.

The Dublin-born Doyle is the son of Terry Doyle who is the former president of the association of referees Leinster branch, and he went to school in Terenure College. The 38 year-old refereed last year’s quarter-final between Munster and Toulouse at Thomond Park.

Tipperary native John Lacey will be in the middle for the Challenge Cup semi-final between former winners Cardiff Blues and Pau at the Cardiff Arms Park on Saturday April 21st. Pau have three Irish players in their side - Dave Foley, Sean Dougall and Paddy Butler.