Ireland’s World Cup journey stymied by those above them 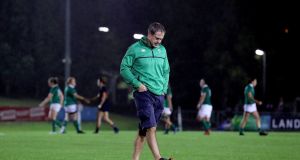 Morale has never been so low. That is an achievement in itself by Ireland coach Tom Tierney. The ghosts of Lens 1999 seeped into the UCD Bowl last Thursday night.

Tierney can add this failed World Cup campaign to an interesting rugby CV.

“What happened tonight cannot be blamed on any player,” tweeted former Ireland coach Philip ‘Goose’ Doyle. “They are told what to do. ‘Best prepared team EVER.’ Don’t think so mate!!!”

Presumably Doyle was referring to comments by Ed Slattery, Ireland’s strength and conditioning coach, back in June.

“They’ve had more sessions and more training weekends over the last 18 months than they’ve ever had,” Slattery told the42.ie. “The preparation has been a lot more robust and a lot more defined than it has ever previously been with the women’s rugby team.”

The perception being that Doyle’s management, despite leading Ireland to a World Cup semi-final in 2014, and beating New Zealand along the way, lacked the professionalism of the current set-up. Of course Slattery’s comments are open to ridicule after three stuttering, at times abysmal, performances against Australia, Japan and France.

If Anthony Eddy is director of women and Sevens and Tom Tierney is the head coach of 15s then what is that relationship?

Ultimately, the buck does not stop with head coach Tom Tierney but his boss, the women’s and Sevens director of rugby, Anthony Eddy. Pre-tournament preparation comes under scrutiny now. The value of training matches behind closed doors against Japan and Spain look questionable at best.

“Why didn’t they play them in UCD, test out the venue, in front of supporters?” wondered former international Fiona Steed.

Throughout the tournament Steed and Lynne Cantwell have provided robust and defined analysis for RTÉ. Steed would still be coaching if not for a physiotherapy practice and raising three young children with husband John Hayes.

“I think there is a struggle with who is in charge of what,” Steed told The Irish Times. “If Anthony Eddy is director of women and Sevens and Tom Tierney is the head coach of 15s then what is that relationship?”

No point asking either man. Communication is not their strong point.

What happened tonight cannot be blamed on any player they are told what to do "best prepared team EVER"
Don't think so mate !!!

What exactly is remains to be seen.

Breaking down each malfunctioning unit during Ireland’s 21-5 defeat to France reveals a coaching ticket completely out-manoeuvred by their rivals.

The driving maul could not exist because France – using an old Joe Schmidt tactic against the Springboks – refused to engage.

Steed: “But that was the story of the game. If they can’t master their own lineouts, how could they ever expect to master the French? It took five lineouts before they passed straight to Nora Stapleton where the fantastic French backrow were waiting.”

The scrum, embarrassed by a tiny Japanese pack, were too high in their engagement to have any hope of living with France.

“I’ve spent a lot of time at home looking at scrums with someone who knows more about it than me and the set up was completely wrong,” Steed continued. “The scrum managed well in the Six Nations but that was when Lindsay Peat was getting away with coming in at an angle.”

Ireland’s attack exposed a clueless gameplan (pick and go is not a tactic); devoid of any shape or gainline understanding, with playmakers lying too deep and forwards failing to pick running lines that could avoid collisions.

“I liked seeing the determination, the resilience but that was a given even when I played for Ireland when we were getting hammered by England. That’s in the Irish DNA. We never give up, that’s just what happens when we pull on the jersey.

“But that’s not enough. You don’t get points for being determined.”

No continuity, no fast ball – Ali Miller and Jenny Murphy may as well have been flankers.

“All we can see as outsiders and analysts is the lack of progress,” Steed agreed.

The lack of basic skills is the most depressing aspect. Three years ago, on Greg McWilliams’s watch, Ireland made a giant leap in this regard. “Again, we don’t know what’s happening but the with regards the basic errors I don’t buy into this home World Cup pressure thing,” said Steed.

The problems run deeper than that. Late Thursday night Tierney and captain Claire Molloy were keen to shoulder all the responsibility, lavish praise on an excellent French side and move on. But that is unacceptable. Tierney placed all his coaching eggs in Ireland performing over these three Pool matches.

“I stand over that, absolutely,” said Tierney about his constant chopping and changing. “We are a really tight unit, as a 28. Everyone is up to speed on absolutely everything.”

The last sentence is contradicted by performances. Tierney’s interaction with the media is archaic. He refused to answer simple questions about whether Nora Stapleton and Murphy were tactical or injury enforced replacements.

“Again,” he added, “we came up against a superb French team. After 20 minutes it could have been curtains for a lesser team. Great credit to the girls . . .”

It was curtains after 20 minutes.