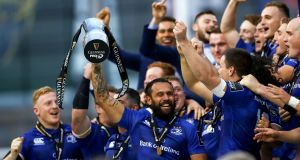 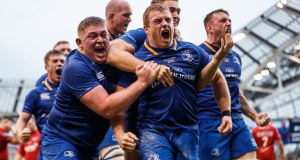 Such are Leinster’s sky-high standards that if one thing gnawed at them over the last two weeks it was that they hadn’t really played their brand of rugby and put on a show in winning the European Champions Cup final or in beating Munster in the semi-finals last week. Well, they put that to rights.

Two late converted tries for the Scarlets distorts the scoreline, as for much of this Guinness Pro14 final, Leinster pummelled the Welsh side and ripped the title from them to earn a record fifth of their own.

In so doing, they also became the first side to complete a European/Pro14 double. No team, not even the great Leinster side that won three European titles in the four years from 2009 to 2012, managed that feat.

It felt much like a re-run of the Ireland-Wales game here in the Six Nations, with Leinster relentlessly monopolising possession and territory, and beating the Scarlets into submission and again demonstrated the same kind of ruthless ability to accumulate points in those championship minutes either side of a half-time.

Johnny Sexton, at his masterful best, was at the hub of nearly everything Leinster did well, as usual, and no less than James Ryan – who was featuring in his 21st win of 21 matches this season, so Sexton has enjoyed a 100 per cent winning return from his 19 games this season.

Leinster varied their game more than in the Champions Cup semi-final thrashing of the Scarlets when reaping a rich dividend from a very direct running game off scrumhalf Luke McGrath, varying the point of attack and going wide, with Sexton also employing his repertoire of kicks. Leinster clearly set out to target Steff Evans in the air, if perhaps slightly overplaying this tactic.

Working off the superb accuracy of their lineout, breakdown work and handling, there were immense games from a raft of players, not least Seán Cronin, Devin Toner, Jack Conan, Luke McGrath, James Lowe and Rob Kearney.

The Scarlets brought plenty of intent and line speed, but were often too quick for their own good. Although James Davies won a turnover in Leinster’s first phased attack, when Luke McGrath broke clear off the blindside of a lineout maul, the Scarlets pushed up too quickly and Sexton opened the scoring.

Whereas Sexton kicked his restarts long towards Steff Evans, and generally forced the Scarlets to concede a lineout inside halfway, Rhys Patchell consistently opted for contestable hanging kicks up the middle. When Aaron Shingler regained the ensuing restart above Devin Toner no less, it led to Leigh Halfpenny drawing the sides level when Tadhg Furlong tugged Rob Evans back off the ball.

When Kearney effectively placed his team-mates offside with a miscued up-and-under, Halfpenny kicked the Scarlets in front. But Leinster’s kick-chase game was gaining them plenty of return, and Kearney atoned when working a clever exchange with Sexton, first feeding his outhalf from Patchell’s clearance and then chasing Sexton’s perfectly weighted up-and-under from inside halfway to just outside the Scarlets’ 22, where he brilliantly gathered the ball above Halfpenny.

James Ryan and Dan Leavy led the ensuing 15-phase attack, which ended in a penalty against James Davies for not rolling away, for Sexton to draw the sides level.

Sexton was feeling the effects of a tackle by Scott Williams, after slightly late hits previously by Tadhg Beirne and Patchell, while Isa Nacewa’s final day in his stellar Leinster career came to a premature end at the end of the first quarter as his calf gave in again and, to hugely appreciative roars, he was replaced by Rory O’Loughlin.

Sexton then nudged Leinster in front after good some good footwork and a neat transfer by Lowe up the middle released O’Loughlin and the Scarlets were again offside.

On the half-hour, after another big carry off the base of a solid scrum by Conan, Sexton ran back Halfpenny’s long clearance, and Leinster went through multiple phases. Carries by Furlong, Conan and Sexton brought them closer to the Scarlets line, and after Cian Healy and Sexton again were both held up fractionally short, Leavy and Conan latched on to Toner to drive him over.

Finally, the Scarlets came out to play, with Gareth Davies and Patchell putting plenty of zip onto the ball as they went through he phases, cleverly trucking it up through forwards up the right, then reloading their backs wide left where Johnny McNicholl and Gareth Davies were held up short before McNicholl plunged over. Surprisingly, Halfpenny missed the conversion from about 15 metres in.

Shingler then hobbled off with what seemed like a knee injury, so depriving the Scarlets of his lineout skills, athleticism and strong running game, especially as he was replaced by Will Boyde, a smaller, out-and-out openside.

Worse followed for the Scarlets after Halfpenny couldn’t gather Sexton’s steepling up-and-under. Sexton crosskicked to Lowe off the scrum, and after he was tackled by Halfpenny and then McNicholl, the latter played the ball after the tackle on the ground.

With the 40 minutes up, Sexton twice kicked penalties into the corner, and from the second maul Luke McGrath cleverly created a blindside two-on-one for Sexton’s deft transfer to put Lowe over by the corner flag. Almost as impressively, Sexton judged the wind to perfection in fading his conversion from the left touchline, the ball starting outside the left post before veering inside it to make it 21-11 at the break, which looked all the better given the breeze they were playing into appeared to have grown stronger since kick-off.

Leinster went for the jugular, but Ryan lost possession inches shy of the line and the Scarlets exited well, but Leinster kept probing, and when Scott Williams read Sexton’s trademark wraparound he also caught the outhalf in the jaw with his shoulder. It took an age for the officials to revert to the replays and incredibly, the Scottish TMO Neil Paterson somehow deemed the high hit was “not dangerous” and merely worthy of a penalty. Nor was there much need for Rob Evans to give Sexton some lip. Sexton’s revenge was to find a monstrous touch close to the Scarlets’ corner flag.

Cronin again found Ryan and as the maul gathered oomph, he sniped off it on the blindside to dive for glory. As Sexton walked back for the conversion with the ball in his hands, he glared at someone in the Scarlets’ ranks, presumably Williams or Rob Evans. This time too, from the right touchline, he again judged the wind perfectly to bisect the uprights and make it 28-11.

Cue Jordan Larmour. Relatively starved of real attacking opportunities there didn’t appear to be much on when Scott Williams kicked the ball in behind him, but Larmour gathered and kicked downfield in one smooth movement and then set off at such pace he had soon overtaken the initial line of Scarlets chasers like a convertible who was making them look like they were being towed.

He had time to weigh up his options, and slowing, opted for a brilliant one-handed pick-up, like a bird pouncing for its prey, while scarcely breaking stride to dive over at practically the same point as Cronin had done.

With every repeat on the big screens, the crowd oohed and aahed even more. The moment certainly stood up to repeated viewings. Leinster turned to their bench, and Sexton was afforded the kind of ovation he and his performance deserved.

There was a fine corner flag finish from McNicholl and, Leinster, as if insulted responded, when Joey Carbery stood up Hadleigh Parkes and did him like a kipper to break clear with almost his first touch. He then found Luke McGrath on his inside and he ran on before giving the scoring pass inside to the deserving Conan, although McGrath took a cheap and unpunished shot from Gareth Davies in the process.

There were late tries by Werner Kruger and, from their own gainline, McNicholl for a third time, but that did little to dilute the mood among home squad and crowd alike. In truth, the scoreline flattened the West Wales region after Leinster had completed their greatest ever season in style.