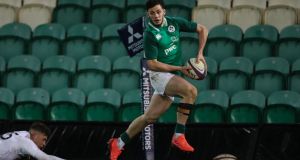 Conan, Cronin and Byrne start on the bench having played just two matches this season, coincidentally against the same opposition in each case, the Dragons and Benetton, both in the Guinness Pro14. Sexton has just a single appearance, 24 minutes against the aforementioned Welsh side.

The Leinster and Ireland captain wasn’t due to play this week but an injury to Ciaran Frawley in training has thrust him back into the outhalf role. McGrath said of the late alteration: “He (Sexton) was very supportive to be fair, he (sent) me a text and Leo (Cullen) was happy for the team to remain what it was and just add Johnny in there.

“It’s great, it gives me a lot of experience outside and it will be great for Max (O’Reilly) and Smithy (Andrew Smith) to make their debuts with Johnny leading as well.” The two underage internationals are excellent prospects and have already made quite an impression on the senior group.

McGrath continued: “Max was probably going to play last week against Munster, and it was unlucky that he didn’t (when the match was postponed). He’s looked sharp in training, in that 15 (role). He’s a very bright talent, the same with Smithy; he grew up close to me so it’s funny that I’m leading him out. He’s a brilliant talent (with) a really bright future.”

Jimmy O’Brien, who has impressed at fullback this season, switches to outside centre where he will partner Rory O’Loughlin while in the pack the frontrow trio have been consistently excellent, Devin Toner and Ross Molony, quite apart from their other attributes are excellent lineout technicians, and then there is a backrow that contains three superb rugby players in Ryan Baird, Scott Penny and Dan Leavy.

Connacht coach Andy Friend will be looking for a positive reaction from his players following a disappointing run of late with the exception of a brilliant performance in defeat to Racing 92. The presence of so many former Leinster academy or Leinster born players should add a little spice to the encounter.

The visitors have played well in fits and starts and need to elongate those stretches in matches. The scrum caused Ulster problems initially, Gavin Thornbury excels on both sides of the ball out of touch, Caolin Blade’s consistent quality has earned the starting nine jersey while Alex Wootton is one of the form wingers in the country.

Ultan Dillane will provide impact off the bench, one that contains former Australian Sevens international Ben O’Donnell, set to make his debut and an excellent prospect in former Roscrea schoolboy Diarmuid Kilgallen.

Connacht have shipped heavy defeats in the last couple of matches against Leinster but if they can produce better game management to supplement aggression and intensity they will be more competitive; albeit without changing the result.