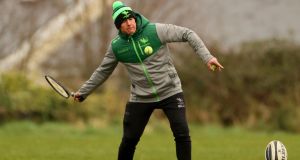 Connacht boss Andy Friend has made five changes to the side which were beaten by Ulster ahead of Saturday’s clash with Leinster at the RDS.

The province also confirmed a number of players tested positive for Covid-19 this week, a statement said: “This follows the weekly round of PCR testing, and separate tests conducted at the start of the week after a small number of players presented minor symptoms.

“These players along with a number of others identified as close contacts are self-isolating in accordance with public health guidelines.

“In total 68 Connacht players and staff tested negative this week and, following full engagement with public health authorities and Pro14 Rugby, they are satisfied the game can proceed as scheduled.”

In the Connacht pack, Dominic Robertson-McCoy, Denis Buckley and Shane Delahunt are named in the frontrow. Quinn Roux captains the side in the secondrow alongside Gavin Thornbury. Sean Masterson, Eoghan Masterson and Conor Oliver complete the pack.

Caolin Blade and Jack Carty start in the halfbacks, with Tom Daly and Sammy Arnold in midfield. Peter Sullivan, Alex Wootton and John Porch complete the back three.

There’s also the chance for former Australian Sevens star Ben O’Donnell to make his Connacht debut off the bench.

Ahead of the match, Friend said: “While we have had to deal with a few cases in the squad this week, we have still been able to name a strong team thanks to the depth we have been building these past few months. It’s also really pleasing to be able to include Ben O’Donnell in our 23 for the first time.

“Even though there’s a lot of frustration about our last few results, the overall mood in the squad is good. We can’t wait to head to Dublin and test ourselves against what’s clearly a very strong Leinster side.”