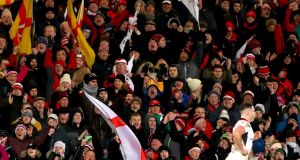 The needs of Irish rugby tend to differ from what Leinster want. This article tracks the winding roads of Ulster’s five Dubliners before David Nucifora’s master plan is further embraced by Jordi Murphy and Marty Moore sampling some Belfast living this summer.

Factor in academy lock Jack Regan, of Offaly hurling stock, and soon enough there should be eight Leinster men on Ulster’s payroll. It’s further evidence of Leinster talent plugging gaping holes in the other provinces.

Of course Murphy and Moore are moving north for career reasons but, inadvertently, they are breaking down barriers.

“He had some beliefs that were wrong,” said John Cooney before Murphy signed for Ulster. “I just told him it was a good place, it’s only two hours up the way and I had the same with Galway – you just listen to podcasts, audio books and it’s not that hard to drive two hours, for me it’s quite easy now. He’ll be close to home.”

Any two-litre engine can do Dublin 8 to Ravenhill road in 90 minutes flat.

This list of non-Ulster reared Irish players – excluding project players like the constantly disappointing Rodney Ah You – begins with Cooney’s instant success story. Nobody could have predicted his contribution of 119 points over 15 appearances including a difficult conversion to nudge them clear of Munster on January 1st.

Cooney, like many before and since, was denied the chance to become Leinster’s primary scrumhalf by timing (in contrast, Luke McGrath profited from Eoin Reddan and Isaac Boss retiring for varying reasons last summer).

Cooney is the opposite of instant success. Already 27, and despite seeing out the 2012 Heineken Cup final defeat of Ulster at Twickenham, Leinster only played him 27 times over four seasons before a hoped-for breakthrough with Connacht was blocked by Kieran Marmion.

So Cooney did something groundbreaking, and logical, by venturing north. The stigma attached to this move needed shredding. Many Leinster players had previously rejected the Belfast option because of preconceived perceptions.

“It all depends on the type of person,” said Cooney late last year. “If I’m playing for Ulster, I’m a competitive player and I will work hard. I will give 100 per cent. I don’t think it matters that I’m not from Ulster. I care just as much about playing for Ulster as I did for Leinster.”

Sounds so simple, like any professional, but it has taken a full generation of arguably wasted alternative talent for this attitude to take hold.

Cooney wasn’t wanted by Ulster. Certainly not as their starting scrumhalf. That was to continue being Ruan Pienaar until Nucifora firmly presented one option: specialist positions need Irish players in them in all four provinces. That edict is paying off far better than anyone expected.

Leinster and Connacht failed to fully grasp Cooney was a place kicker because they didn’t need one as desperately as Ulster did once Paddy Jackson was ruled out. Operations director Bryn Cunningham is back in the market for an outhalf as Christian Lealiifano returns to Australia after the Wasps game on January 21st.

Leinster will hardly allow Ross Byrne or Joey Carbery to even temporarily fill that void but otherwise movement between provinces is fluid now. On New Year’s Day former Springbok Jean Deysel was flanked by Nick Timoney and Greg Jones. Leinster boys, currently Ulster men. Timoney, who captained a Blackrock side with Carbery and redirected Munster forwards Conor Oliver and Jeremy Loughman to Leinster Schools Cup glory in 2014, made a stirring debut against the Dragons in September.

This followed two seasons Timoney balanced Ireland Sevens duty with trying to get noticed playing for Banbridge in the AIL.

Jones only entered the Ulster system this season but, like Max Deegan his team-mate on the Ireland U-20s side that reached the 2016 World Cup final, he’s made a rapid transition into the professional game.

Leinster took Deegan along with Josh Murphy, Will Connors and Caelen Doris over Timoney, Jones and others but that decision is no longer the be-all and end -all. Not to Timoney, not to Jones.

And there are others. Former Belvedere College scrumhalf Dave Shanahan is on an Ulster development contract and Cork flanker Clive Ross, cousin of Mike, arrived in Belfast via Lansdowne in 2014.

That Alan O’Connor was rejected by Leinster is not without a dose of irony on seeing who was picked instead. Just before boarding the plane to Cape Town for the 2012 Junior World Cup, the Skerries lock was told that Blackrock and Clongowes players had snatched his professional deal.

“They said they were going to take one young lad Gavin Thornbury, out of school, and Tadhg Beirne, ” O’Connor said in 2016.

Granted, Thornbury (now with Connacht via New Zealand) was 6ft 8in while Beirne (en route to Munster after shining for the Scarlets) was keeping O’Connor off the Ireland U-20s team.

“I was really gutted by the whole thing. I thought I was definitely going to get in. I know I wasn’t getting picked for the Irish 20s at that stage but before that all the feedback was very positive about the whole thing. Then it was: ‘We’re not taking you but if you have a great World Cup you’ll be reconsidered.’”

Ireland beat South Africa thanks to a monumental performance from Iain Henderson, with O’Connor coming off the bench for Beirne, as JJ Hanrahan kicked the lights out. Allen Clarke, then Ireland under-20s coach, took him to Ulster on an academy contract. Some 51 caps later, he’s keeping Henderson on the blindside for big European days as Kieran Treadwell grows into his locking frame.

Incidentally, O’Connor’s brother, David, skipped a similar youths pathway by entering Blackrock to play on Timoney’s cup-winning sides but after two seasons with the Leinster academy, until this summer, he is back playing AIL for St Mary’s.

There’s better places to go, this much is clear, but club rugby isn’t the end of the line either. A virtuous circle, with Leinster at its core, exists for now.