Leinster hold on to deny resurgent Connacht at a windy RDS 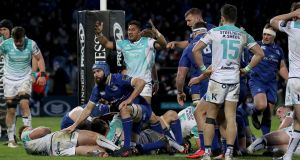 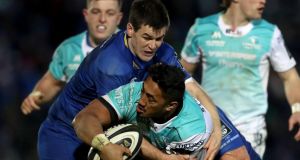 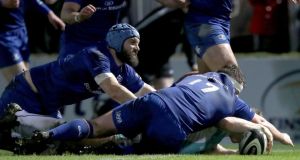 Matt Healy reaches to score for Connacht in their 21-18 defeat to Leinster at the RDS. Photograph: Bryan Keane/Inpho

The final throes of a pulsating, richly entertaining, tension-laden Guinness Pro14 match took place in the shadow of the Leinster posts, a relentless sequence of gladiatorial collisions where millimetres of turf separated victors from vanquished. It wasn’t so much small margins as miniscule.

Leinster’s defiance in defence allowed them to survive some 28 phases with the clock in the red, a remarkable sequence that saw Connacht come within touching distance of the line before eventually being driven out to the 22-metre-line where Leinster number eight Max Deegan forced a penalty turnover at a ruck.

The explosion of sound from the stands and the reaction of the players, Leinster’s exultant, Connacht’s crestfallen, provided images for the outpouring of emotion. This was a match the home side looked to have won twice when leading 11-3 and 21-13 at various stages but Connacht refused to buckle, demonstrating great character to close the gap on the scoreboard.

Connacht lost a little bit of shape in those crucial moments, trying to batter a way through the home defence and those linear, narrow attacks, rendered the attacking gambits easier to decipher. It’s difficult to be clear-eyed, thinking dispassionately with the adrenaline coursing through the veins and the objective within touching distance.

Connacht coach Kieran Keane and their outstanding secondrow Ultan Dillane spoke about the lack of clarity of thought in the end game, the sense of disappointment at the outcome but, in the case of Keane, the pride he felt at the character shown by his players.

Most stood up and several stood out, Dillane, James Cannon and Eogha Masterson upped the physical ante on both sides of the ball, Bundee Aki was a real handful, providing physicality and penetration in the midfield, while Matt Healy’s excellent form continued, his pace, balance and footwork in evidence for his sharply taken try. Kieran Marmion was sharp.

Leinster had their blue-clad heroes, James Lowe’s effervescent brilliance was evident every time he touched the ball, running clever lines, strong through the tackle and his offload to Noel Reid, the latter running a clever wraparound, for Deegan’s try, was delightful.

Dan Leavy was compiling another performance of rich promise when forced off the pitch with a back issue just before half-time, scrumhalf Luke McGrath was the catalyst for the majority of his side’s best attacking moments while Jonathan Sexton’s game management and vision was exemplary. Josh van der Flier was immense in the second half while Deegan’s offered glimpses of his athletic ability.

Scott Fardy’s introduction brought an intelligence and appreciation that would prove influential, while man of the match Seán Cronin’s pace and workrate made him a real handful. Leinster could have squeezed in a couple more tries into their match portfolio but for a flawed final pass or decision. It might have made the end game less fraught.

Connacht dominated territory and possession for most of the opening 20 minutes of the first half but the return on the scoreboard was a great deal more modest, a penalty from outhalf Jack Carty. The visitors were quite narrow in their attacking patterns during that period, looking to punch holes on the fringes but found a largely vigilant Leinster defence.

The home side were disciplined in the tackle area but once spotting an opportunity were quick to get in over the ball; Leavy twice and Deegan winning penalties at ruck time to stifle Connacht’s momentum. Leinster understood the value of hanging onto the ball playing into the strong wind and gradually their patience and recycling was rewarded, discovering gaps in the Connacht defence.

Marmion saved a certain try with a wonderful tackle on Rob Kearney, McGrath, whose break was the catalyst for the first incident, scampered clear again after superb work by Lowe and Sexton the covering Healy chopped him down.

Sexton’s two penalties had given Leinster a 6-3 lead, Deegan’s try made it 11-3, only for the momentum to change appreciably in the last 10-minutes of the half. Carty kicked a penalty, Connacht were a little more adventurous in seeking out space and led by Aki began to make line breaks; one such effort culminated in a try for Finlay Bealham. Carty’s conversion gave Connacht a 13-11 interval lead.

Sexton kicked a penalty in the 48th minute and then improved upon McGrath’s well-take try, the scrumhalf demonstrating good strength to force his way over; at 21-13 with 20-minutes remaining Leinster had a healthy lead. But like they did in the first half Connacht came storming try, Healy beating three would-be tacklers on the way to crossing for a try.

It set up an utterly compelling end game, one not without the blemishes - Connacht will rue a couple of missed penalties to touch, Leinster some indiscipline at ruck time - but the mistakes simply ratcheted up the tension levels without really detracting from the spectacle.

Longford football team of 1968 still deserve special mention 07:00
Niall Quinn and Brian Kerr differ on role of outsiders in FAI 06:00
New team, fresh start, has Dan Martin shooting for the stages 06:00
Sporting Cathedrals: Cheltenham reveals all about the wonder of racing 06:00
Fathers, sons and soccer: Reflections on the family business 06:00
Here is your handy guide to sport on television this week