Dan Leavy named in Leinster team for trip to Edinburgh 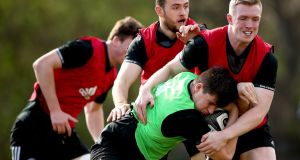 Dan Leavy is back in the Leinster team for this weekend’s Pro14 trip to Edinburgh. Photograph: Ryan Byrne/Inpho

Dan Leavy will make his first appearance of 2019 after being named in the Leinster team to play Edinburgh in Murrayfield on Friday night (kick-off 7.35pm - live on eir Sport).

Ciarán Frawley comes in to the team at fullback for his first start in the number 15 jersey, with Fergus McFadden on the right wing and Barry Daly on the left.

In the centre Joe Tomane makes his first start since injuring his hamstring in November against the Southern Kings. The 17 times capped Australian is joined in the centre by Noel Reid.

Luke McGrath is also back from a knee injury to take his place at scrumhalf with Ross Byrne outside him at number 10.

In the pack the front row sees Ed Byrne, Seán Cronin and Michael Bent selected with Josh Murphy and Mick Kearney in the secondrow.

Captain Rhys Ruddock is joined in the backrow by Leavy who has recovered from the calf injury which ruled him out of the Six Nations, and by Max Deegan to complete the Leinster XV.

On the bench Nick McCarthy is the final player to make a welcome return from injury with the 23 year old selected for the first time since November.

1 The unsolved mystery of Goran Ivanisevic’s stunning Wimbledon win
2 The Game Changers: Vincent O’Brien, a pioneer who took Irish racing to the world
3 Tipping Point: DeChambeau’s transformation raises questions, but who will ask them?
4 Dan Carter to return to Christchurch as an Auckland Blues player
5 John O’Sullivan: IRFU must recognise vital role of clubs in rugby's return
Real news has value SUBSCRIBE