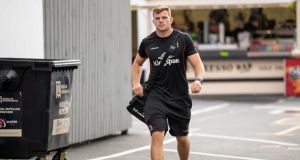 New Ulster recruit Jordi Murphy is in line to make his debut for the province in Friday’s home clash with Edinburgh as Dan McFarland’s squad bid to register two wins from two after narrowly beating the Scarlets last Saturday in their Pro14 opener.

As well as former Leinster backrower Murphy, fellow Ireland international Rob Herring will also be available to McFarland though both players, who were involved in last summer’s tour success to Australia, could feature on Ulster’s bench as they prepare for their first taste of action this season.

Iain Henderson is poised to start again after the Ireland and Lions player put in a notable display against the last minute 15-13 win over the Welsh as should Springbok Marcell Coetzee who came through his first competitive game in a year with some powerful ball-carrying.

“Jordi (Murphy) and Rob (Herring) will add a lot of impact and they are really eager to go,” said Ulster scrum coach and former Leinster player Aaron Dundon.

“This (Edinburgh) will be a good test to see where we are but hopefully we’ll improve and just keep building,” he added.

McFarland will be familiar enough with Edinburgh after leaving as Scotland assistant coach to hook up with the province and he has already made it clear that Richard Cockerill’s side will provide a significant challenge.

Edinburgh came away with the spoils from their last trip to Belfast and ultimately finished above Ulster in Conference B to deny the province a place in last season’s play-offs.

Dundon praised both Henderson, highlighting his lineout defence, and the ball-carrying of Coetzee for their work last week as well as mentioning the inputs by young props Tom O’Toole and Eric O’Sullivan, the latter who made his Pro14 debut.

“Having Marcell back and starting to get a bit more fitness is good,” Dundon said. “Marcell is a big unit and carrying well. That was one of the areas we struggled with last season with ball-carriers especially with a couple of the main guys carrying injuries. But it’s going to be another big test especially against Edinburgh. It was a good start but we have to keep working hard and keep developing,” Dundon added.

On the injury front, O’Toole left the field with concussion against the Scarlets and is a doubt for this week against a side who narrowly lost their opener at Ospreys last weekend.

New signing Will Addison also impressed at full-back on his Ulster debut but is nursing bruised ribs though he may yet be passed fit.

Former Leinster and Wasps prop Marty Moore missed out on his competitive debut against the Scarlets due to a calf injury and may also be sitting out this weekend though South African Wiehahn Herbst is believed to be fit and could feature in the squad.