Rugby may be exempt to continue under possible Level 5 restrictions 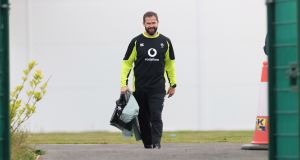 Although Nphet’s latest recommendation has cast a cloud over Ireland’s re-arranged 2020 Guinness Six Nations games at home to Italy and away to France over the next two Saturdays, it would be premature to deduce that the matches would be called off again even if the Government agreed to move the country to Level 5 restrictions for a period of six weeks.

Senior Government figures are to meet today to consider the recommendation from the National Public Health Emergency Team after a significant increase in Covid-19 infection levels.

The Government’s Level 5 guidelines in relation to sport, in addition to “individual training only”, specifically state: “No matches or events to take place.”

However, even if Level 5 was put in place, it is understood that the IRFU, along with other sports organisations, have made their case to the Sport Ireland Expert group which is working with the Government that exemptions could be made for elite sports events such as Ireland’s upcoming internationals and the province’s games.

Cancelling the upcoming two games would effectively cost the IRFU, already losing an estimated €5 million per month, circa another €4 million. The four games in the one-off Autumn Nations Cup, beginning with Wales at home on Friday November 13th, would likely earn the Union more than €1.5 million in TV rights and sponsorship as well.

Thus far, touch wood, Irish rugby at professional level has managed to control its environment with relative effectiveness. For example, Peter O’Mahony and Chris Farrell are in isolation after being deemed close contacts of a Munster player who tested positive, although are “Covid free”. They will join up with the rest of the 34-man squad at the High Performance Centre in Abbotstown tomorrow evening.

All players and management produced negative PCR tests on Monday ahead of meeting up on Wednesday, with Johnny Sexton (hamstring), Rónan Kelleher (quad) and Andrew Porter (hamstring) returning to moderated training on Thursday.

“We’re quite prepared to see how a newish squad comes together and unfolds, and a couple of boys will fit back in with us on Sunday, train on Monday, and we’ll see how they fall back in as well.”

Indeed, the coaching staff will seemingly place great store by training, not least in the outside backs after Jordan Larmour (dislocated shoulder) was ruled out in addition to Keith Earls and Will Addison.

Farrell was non-committal as to whether Andrew Conway or Robbie Henshaw might be considered for the fullback role. Conway twice wore 15 for Ireland in 2017 against Japan and Fiji. Henshaw did so on his debut in the USA over seven years ago and the defeat at home by England in February last year.

The more likely options would be Jacob Stockdale, who has started in the position in five of his seven games for Ulster since the restart, or one of the uncapped duo of Hugo Keenan and Shane Daly.

“There’s a few different things that we can look at besides the obvious there with people being able to fill in. We’re willing and able to see how things develop in these coming days and how people deal with the pressures of international camp. Tomorrow (Saturday) is a pretty big training session for us and we’ll see how that goes.”

This would appear to suggest that Keenan and Daly, one of whom seems in line to make a debut against Italy, are being monitored with particular interest.

“We’ll see how that (training) goes, but from what I’ve seen and from what I know they are stellar students of the game. That’s 100 per cent for sure. They’re clever boys that seem to be able to pick things up pretty quickly. I’ve no doubt their potential is going to be fantastic going forward for Ireland.”

Another uncapped player whose form, understandably, has caught Farrell’s eye is Jamison Gibson-Park.

“He brings something a little bit different,” said Farrell. “He’s got an ability to play with his head up and see where the space is, whether that’s at the side of him or whether that’s out wide.

“He’s got a calm process when he’s on his way to the ruck as well; having said that, he does that at speed. He’s able to see quite a few pictures and make a decision so he’s a calming influence and he’s able to play in not just one or two ways. He’s able to make the decision through trusting what he sees.”

Ireland go into this rescheduled finale in fourth place but knowing that a nine point return could be sufficient to win the title while a maximum 10-point haul, though a long shot, would secure first place.

“When you look at it, we’re one of the teams that’s lucky enough to still be in the hunt, so why wouldn’t we go and hunt it? And that’s how the whole group feels. Obviously it’s a tough old task because we know what we probably will need but we’ll need to give it a go.

“I think we’re the only team that can look after their own destiny really. Like you said 10 points would seal it for us. But I don’t want to be disrespectful to Italy or France. All I want to do is make sure that we focus on ourselves and that it’s a performance that we’re happy with.”