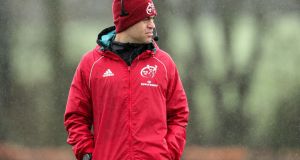 Jack O’Donoghue will make his first start in his second appearance of the season following a serious knee injury in a team that show seven changes and a positional switch from that which lost to the Scarlets three weeks ago.

The Waterford man joins a new backrow that contains captain for the night and Ireland number eight CJ Stander and Chris Cloete, while the other changes in the pack see Darren O’Shea start in the secondrow and Stephen Archer at tighthead prop.

The continuing uncertainty, from the outside at least, with regard to Joey Carbery’s fitness ahead of Saturday week’s Champions Cup quarter-final against Edinburgh at Murrayfield, will bring JJ Hanrahan’s performance into a sharper focus.

The talented Kerry man gets that starting jersey with Tyler Bleyendaal due to make his 50th appearance for the province if he’s introduced during the game.

The Munster bench is ridiculously strong, literally and figuratively, and includes Irish squad members Niall Scannell, John Ryan and Chris Farrell as well as a couple of South African buttresses in Jean Kleyn and Arno Botha. There is one further change behind the scrum with Alex Wootton starting on the left wing.

Zebre, under the coaching direction of former Munster and Ireland scrumhalf Michael Bradley, will be without Tommaso Castello, who fractured his leg against England a fortnight ago, but does contain nine Italian internationals who played for the Azzurri in the recent Six Nations Championship.

There is a first ever selection in the matchday 23 for the Italian-Argentine tight-head prop Marco Ciccioli, who arrived in Parma last week from Buenos Aires Club Atletico San Isidro.

Munster sit three points adrift of the Glasgow Warriors in the Conference A table but will look to maintain the pressure on the Scottish club in a race for the top spot at the end of the league stage of the tournament that offers an automatic place and home advantage in a semi-final.

Munster coach Johann van Graan will have gently reminded his players that for some of those that excel this weekend, the reward will be a place in the matchday squad for next weekend’s Champions Cup quarter-final; his wish list will also contain the hope that there are no injuries.