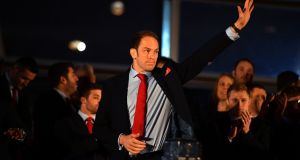 Wales captain Alun Wyn Jones has been unveiled as the 2019 Six Nations Player of the Championship.

The experienced secondrow captained his side to their first Grand Slam since 2012.

Before going to a public vote, a shortlist of six players - four Welsh and two English - were chosen by a panel of rugby writers and broadcasters from across the six participating countries. Along with the Welsh lock, they was Hadleigh Parkes, Josh Adams, Liam Williams, and English duo Jonny May and Tom Curry.

Jones led his country to a first Six Nations title for six years, while Wales climbed to second in the world rankings behind New Zealand.

On receiving the award he said: “I’m very flattered. For me as the captain, it’s a validation of what we’ve done as a squad throughout the campaign. To be up there as a nominee with three other Welsh players and two outstanding players from England would have been more than enough and I’m very grateful to the people who have taken the time to vote.”

It’s not all been good news for Jones however, he sustained knee-ligament damage during last weekend’s Grand Slam winning match against Ireland, while his team-mate George North broke two bones in his hand during the 25-7 victory.

Both players’ regional team the Ospreys confirmed their injuries, although they have not ruled out Jones and North being back for the Pro14 clash against Cardiff Blues on April 2th7.

Wing North went off early in Wales’ Six Nations title-clinching victory at the Principality Stadium, but player of the tournament Jones continued after receiving first-half treatment.

The Ospreys’ final regular-season game is against the Blues, although they still have a chance of securing a title play-off place.

Wales, meanwhile, do not play again until August 11th, when they face England at Twickenham in a World Cup warm-up match.

“He won’t travel to South Africa with the squad at the start of April (the Ospreys face league games against the Cheetahs and Southern Kings), but at this stage we haven’t ruled him out of the game against Cardiff Blues.

“George fractured two metacarpals in his left hand early in the Ireland match.

“Having seen a specialist this week, he needs time for the bones to heal, but we are optimistic about the potential for him to be involved on judgement day (against the Blues).”