Andy Friend brings in Stephen Fitzgerald at fullback, with Adeolokun introduced on the right wing, and Porch switching to the left 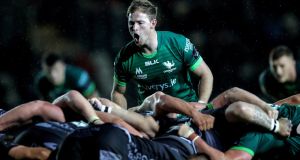 Connacht’s Kieran Marmion: he has been linked with a move to Saracens. Photograph: Laszlo Geczo/Inpho

Injuries to fullback Tiernan O’Halloran and prop Paddy McAllister, both of whom will be sidelined until December, has forced Connacht coach Andy Friend into a couple of enforced changes – there are four in total to the starting team – as the Irish province host the unbeaten Cheetahs.

Former Ireland under-20 international Stephen Fitzgerald comes in at fullback, Niyi Adeolokun is introduced on the right wing, with John Porch switching to the left.

Kieran Marmion, who has been linked with a move to Saracens, is named at scrumhalf, while Denis Buckley gets his first start of the season at loosehead prop.

The Cheetahs are under new management as Franco Smith has departed to take up a position with the Italian national side, with Hawies Fourie enjoying his first game in charge of the South African franchise.

Unbeaten in their first three matches, all of which were at home, the Currie Cup champions have already handed out heavy beatings to Ulster and Munster respectively, and will be looking for a hat-trick of victories over Irish provinces.

Aranos Coetzee is named at tighthead prop after returning from World Cup duty with Namibia, while Jasper Wiese, Dries Swanepoel and Clayton Blommetjies are the other changes to the team that beat Munster in their most recent outing.

Despite the injury issues there is a reasonably settled look to the Connacht team, who have recovered from an opening weekend defeat away to the Scarlets with a brace of wins.

Conor Fitzgerald, younger brother of fullback Stephen, has impressed at outhalf, while Gavin Thornbury is another to have caught the eye with his early season form.

The cohesion that comes with playing together should stand to the home side, while there are some standout players on the bench including Ultan Dillane, young Cillian Gallagher, Caolin Blade and Tom Farrell, all of whom can impact a game.

Conditions will be pretty alien to the visitors, and it will be a good test of their temperament, while Connacht will know more about where they stand as a group after testing themselves against the conference pacesetters.