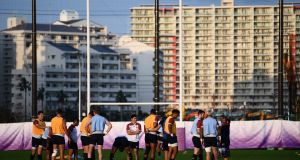 New Zealand are the best team at this tournament, as they have been at every World Cup since its inception.

The four year planning cycle New Zealand have developed for World Cups is at a level of strategic thinking and execution far above any other country.

The New Zealanders effort is on a national scale.

It is not just the Super Rugby franchises or the Mitre 10 Cup teams that play the New Zealand way. Even schoolboy teams play in a remarkably similar style to their national team.

That is New Zealand planning for the 2027 World Cup and beyond.

Despite the obvious brilliance the New Zealanders bring to the international game, for them to win three World Cups in a row is not good for rugby. Spreading the joy of winning is good, not one country dominating all others.

Three of the four semi-final coaches share my opinion. I am sure that Steve Hansen, the straight talking, quietly-spoken Kiwi head coach does not.

All week Hansen appeared genuinely shocked by all the talk of pressure on his team. His relaxed body language and controlled talk seem to say: “It’s just another Rugby World Cup semi final. After all New Zealand have played in so many. Why all the excitement?”

Much of that excitement has been generated by Eddie Jones. Who has adopted the role of Yoda at this World Cup.

As Australian coach in 2003, Jones got the better of New Zealand in the semi-finals. Eddie won a World Cup as the Springboks assistant coach to Jake White in 2007. Now he has England in the final four.

I guess he does have a point. “Wisdom has he.”

The public persona of an overconfident, aggressive, workaholic is well managed by Eddie. He is all of those things, but he is also shrewd, experienced, intelligent and highly successful.

He is also a coach who is in total control of his environment and having a great fun doing it. Eddie once again set this week’s media agenda with allegations his English team were being spied upon.

Eddie has the English media pack eating from his hands. ‘Clickbait’ as Steve Hansen described it, complete with photos of English staff, giggling, pointing at a ‘sniper’ high in an apartment tower, supposedly videoing English training. Like the Secret Service agents in Dallas, pointing to the grassy knoll, it was a brilliantly choreographed myth.

Of course all of this is planned to distract attention away from how England will deal with New Zealand.

At Eddie’s press conference the other day there was twinkle in his eyes as he delivered a masterclass in getting the message across regardless of the question. “There is massive pressure on New Zealand trying to win the World Cup three times . . . It’s much harder to defend a World Cup than to win it . . . The pressure in this match is going get up and chase New Zealand down the street.” It went on and on and on . . .

I sat there laughing. It was brilliant stuff.

While Hansen was quietly bemused, Warren Gatland and Rassie Erasmus spent all week thanking there lucky stars they were not on Jones’ radar as they got through a semi-final week without anywhere near the level of scrutiny that the English and New Zealanders received.

Wales are unique. They have played ‘Warrenball’ for years. Yet that system has delivered a Grand Slam and a World Cup semi final as a minimum return in 2019. These ‘one trick ponies’ – as they have been described – are doing just fine.

Gatland knows his team are a bunch of fighters. They kicked dropped goals to finish off Australia and they scrapped tooth and nail as the French imploded last week. Whatever the price, Wales seemed prepared to pay it. Even with the costly loss of Liam Williams, a fighting team like Wales will be a tough nut to crack.

So this week Gatland’s attitude has been to praise the living daylights out of the Springboks. Unlike our beloved Yoda, Gatland has decided it’s best to not poke a sharpened stick at South Africa.

And so he should. The rejuvenation of the Springboks’ play in this last 18 months under the guidance of Erasmus has been remarkable. Publicly, Erasmus smiles, speaks quietly and let his players performances do the talking for him.

Erasmus has the Boks culturally unified and playing winning rugby. The Boks’ flexibility of how they play is a great strength. That is a rare sight in today’s game. With a giant pack who excel at set play and a three-quarter line who can play direct or attack the wide flanks and counter attack, make no mistake the Boks are a massive challenge.

The collective wisdom is that the winner between England and New Zealand will lift the William Webb Ellis Trophy and that South Africa or Wales are simply making up the numbers.

I know that both Erasmus and Gatland will be more than happy to deal with either Yoda and his Grassy Knoll, or the quiet, straight-talking Kiwi.

Report states Abu Dhabi covered City’s sponsorship, not Etihad 19:22
Ireland’s most capped player hangs up his hockey stick 18:54
Gritty Kim Clijsters’ comeback ended by Garbine Muguruza in Dubai 18:53
Rory McIlroy heads for Mexico with ‘WGC slam’ in sight 16:58
Tiger Roll on track for Aintree after solid run in Navan 16:17
Here is your handy guide to sport on television this week