Rugby World Cup: Jonathan Davies has recovered from injury to start the semi-final 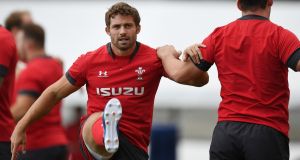 Kick-off: 9am Irish time, Sunday. Venue: Yokohama Stadium. How to follow: The Irish Times liveblog will begin at 8.30am. On TV: Live on Eir Sport, RTÉ2 and ITV.

Full-back Williams’s absence has been confirmed from Sunday’s semi-final against South Africa, and then either the final or third and fourth place play-off next week.

The Welsh Rugby Union said he suffered an ankle injury sustained in an accidental collision during training.

Leigh Halfpenny will feature at full-back instead of Williams against the Springboks, and centre Jonathan Davies has been named in the team after recovering from a knee injury that sidelined him for last weekend’s tense quarter-final victory over France.

“He (Williams) is undoubtedly a big loss from an attacking perspective, and what he has achieved in the game in the last year or so,” Wales head coach Gatland said.

“But bringing in the experience of someone like Leigh Halfpenny gives us a different element.

“He is defensively probably the best full-back in the world in terms of his aerial game and coverage defensively.

“We had a long debate about whether we started Leigh in the first place and potentially move Liam to the wing.

“There was a long discussion about that, so Leigh was probably unlucky he was not in the team in the first place.

“We are disappointed for a world-class player like Liam, but we are happy bringing in someone with the experience of Leigh.

“It is a change, but we don’t think that we are weakening the side in any way with the changes we have made.”

British and Irish Lions Test player Williams was in contention for a remarkable individual grand slam this year.

Aside from chasing World Cup glory, he helped Wales land the Six Nations title in March, then shone when Saracens won the Heineken Champions Cup and Gallagher Premiership.

The experienced Halfpenny has made one start in the tournament — against final pool stage opponents Uruguay — and went on as a replacement against Georgia.

Davies, meanwhile, replaces Owen Watkin, lining up alongside Hadleigh Parkes in midfield, and in a third change, number eight Ross Moriarty takes over from Josh Navidi.

Navidi suffered a hamstring injury in the France game, and had already been ruled out of the rest of the tournament.

Gatland added: “He (Davies) has come through training this week.

“He was very close last week and he made a decision last week to rule himself out for the betterment of the team.

“Hopefully we can get through the rain today with the training and it won’t affect us too much.

“We will have a shorter session this afternoon, and we are excited where we are at the moment.”

Gatland retains the same front-five that has served him well during the tournament, with skipper Alun Wyn Jones making his 142nd Test appearance for Wales and the Lions.