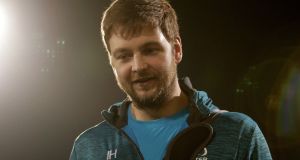 The initial prognosis was that Iain Henderson would be out for eight to 10 weeks when Ulster confirmed the news in early August. File photograph: Inpho

Iain Henderson has made a timely recovery from hip surgery to lead Ulster in the Pro14 final against Leinster at the Aviva stadium on Saturday (7.35).

The initial prognosis was that he would be out for eight to 10 weeks when Ulster confirmed the news in early August but the 28-year-old had actually undergone an operation on the joint almost a month earlier.

The Ulster captain explained: “It was surgery that was planned for the off season and postponed due to everything that went on (with Covid-19). I ended up having the surgery in early July so it hasn’t been a quick process but it has been one that the physios and strength and conditioning departments have been extremely diligent with. They have been a massive help to me.

“I couldn’t explain (fully) how much they have done for me and the massive role they played in getting me back. They were probably sick of hearing me ask the question, ‘when can I get back playing?’ Like every operation the surgeon has to clear it.

“It was a week or two ago that I got chatting to the surgeon and he was happy that if I was continuing to get through the work at the rate I was without any symptoms he would be happy for me to be involved this week.”

Henderson’s last game for Ulster was a Champions Cup tie against Bath in January. He played the first two matches in Ireland’s Six Nations Championship campaign against Scotland and Wales but missed the game against England at Twickenham.

He is one of two survivors - Rob Herring is the other and both were replacements that day - from the 2013 Pro12 final when Leinster beat Ulster at the RDS. Ulster had topped the league but because of the redevelopment of Ravenhill, now the Kingspan stadium, they forfeited home advantage.

Henderson recalled: “My memories were probably mixed emotions. Towards the end of that season, I thought ‘we finished top of the league so why don’t we win the league now?’ Playing that game down there (RDS) was a massive frustration because of the fact that we gave up the home advantage that we had to the opposition.

Henderson admitted that he “would be massively proud and honoured” and that it would be “a huge moment in my career,” to lead Ulster for the first time in a final. His presence is a massive fillip for Dan McFarland’s team who also welcome back New Zealand born, Irish international flanker Sean Reidy from injury.

McFarland said of his returning captain: “It is terrific to have Iain back. He’s the captain of the club and we know what Iain can do for us in those big games. He has shown a propensity to play well in big games and also in big games that come off the back of him not being involved for a number of weeks beforehand. It’s a great boost for the squad.”

The Ulster coach has made some interesting calls in selection, foremost of which is to start former All Black Alby Mathewson instead of John Cooney at scrumhalf. McFarland explained: “That was definitely the most difficult selection decision that I’ve ever been involved in and I’ve been involved in a lot.

“They’re two excellent number nines (but) Alby is playing the better rugby at the moment. I feel really lucky that we as a club have two nines of that quality and the fact we’re able to look to John coming off the bench as Alby did and influence the game and change the way the game is played, potentially in the second half.”

The other changes are in the back three where Michael Lowry comes in at fullback, Jacob Stockdale moves to the left wing with Rob Lyttle shifting across to the right. Lowry is an excellent footballer with great footwork and balance, who is equally capable at outhalf. He played fullback in Ulster’s narrow Champions Cup quarter-final defeat to Leinster last year.

McFarland said: “It’s pretty clear what Michael offers. He has electric feet and the way we want to play the game counter attacking wise, he adds to that. He’s a really talented young player and he can play at No10 as well. There’s great hopes for Michael going forward and we’re really lucky having him in the team this weekend.”

The Ulster coach also outlined his reasons for a six-two split on the bench. “It’s a combination of a number of things. One is that Hendy (Iain Henderson) hasn’t played for a long time, so there’s a good chance (he won’t) last the distance.

“But also the fact that when you play against a team like Leinster they’re tiring matches because the ball is in play a good amount of time. And generally that takes a toll on the forwards more than it does on the backs. We’ve decided to go with the element of risk that there is around having one less back substitute for the game that we could potentially get out of fresh legs coming off the bench in the forwards.”