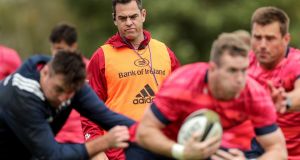 It is less than two weeks since professional rugby returned in Ireland, and already we are into the business end of the season with this weekend’s Pro14 semi-finals.

Two rounds of interprovincial fixtures were a nice way for players and supporters to ease their way back in - four meaningful matches with the right amount of needle and a surprising lack of rust.

Leinster and Munster was the first game back on Irish soil since the restart, and the two provinces meet again on Friday night in what is now a season-defining clash.

In the blue corner stand champions-elect Leinster. They are yet to lose a game this season, a run which includes 15 wins out of 15 in the Pro14, and six wins from six in the Champions Cup.

In the red corner, and bidding to spoil Leinster’s hopes of an unbeaten season, are Munster. Johann van Graan’s side are without silverware since 2011 and have developed an unhappy knack of losing in semi-finals.

It’s a seriously heavyweight fixture between two rivals who will both be desperate for victory, despite the unfamiliar circumstances. Add in Ulster’s semi-final clash against Edinburgh and it makes for an intriguing weekend of rugby.

Here is everything you need to know.

The Pro 14 semi-finals between Leinster and Munster, and Edinburgh against Ulster.

Unfortunately not - the Aviva would probably have been a sell-out on Friday in normal circumstances, but the Covid-19 pandemic means both matches will be played behind closed doors.

Virgin Media customers will not be able to watch either match due to an ongoing dispute between the broadcaster and eir Sport. However eir Sport have confirmed Leinster against Munster will be streamed live for free on their Facebook page - www.facebook.com/eirSport/. You can also follow the match via the Irish Times live blog from 7pm.

If there has been one constant in a heavily disrupted and truncated season it has been Leinster’s dominance. They topped Conference A of the Pro14 with 15 wins from 15, finishing with a positive points difference of 315. Ulster were runners-up in Conference A, finishing six points clear of the Glasgow Warriors.

In Conference B Edinburgh and Munster finished level on 51 points, with the Scottish side coming top by virtue of having won more games - 11 to Munster’s 10. Van Graan’s side beat Connacht to secure their place in the semi-finals ahead of the Scarlets.

What’s happened since the restart?

Leinster edged out Munster 27-25 at the Aviva Stadium on August 22nd as rugby returned in Ireland, with Connacht beating Ulster 26-20 a day later. Ulster were consigned to another defeat a week later - a 28-10 reverse against Leinster - while Munster confirmed their place in the last-four with a 49-12 rout of 13-man Connacht. Over in Scotland, Edinburgh beat Glasgow 30-15 in their first match back before the Warriors exacted revenge with a 15-3 win a week later - both matches held at Murrayfield.

Leinster’s strength in depth is frightening, with a largely second-string side comfortably beating Ulster last time out. James Ryan, Tadhg Furlong and Dan Leavy are not involved with all three returning from injury, however Leo Cullen still has a wealth of international talent to call upon. Johnny Sexton returns at outhalf, with Robbie Henshaw, Garry Ringrose and James Lowe returning in the backline. Will Connors and Devin Toner have been selected ahead of Josh van der Flier and Ryan Baird in the forwards.

Munster suffered a triple-injury blow in their recent defeat to Leinster, with RG Snyman suffering a serious knee injury just seven minutes into his provincial debut. Jean Kleyn and David Kilcoyne were also injured in that match, as Van Graan battles an injury crisis at Thomond Park. However, Peter O’Mahony will be fit to lead the side, while Snyman’s Springbok teammate and World Cup winner Damian de Allende will provide serious presence in midfield. Mike Haley returns to the matchday squad.

Meanwhile Dan McFarland is waiting for news on the fitness of Jacob Stockdale - who has been featuring at fullback - and Stuart McCloskey, while Jordi Murphy is currently following return to play protocols after suffering a concussion against Leinster. Ulster are already without Iain Henderson, Will Addison, Sean Reidy, Robert Baloucoune and Luke Marshall.

Leinster are now unbeaten in 23 matches across all competitions, going back to last season.

In his column this week, Gordon D’Arcy suggests Munster must turn drag Leinster into a “legal brawl” if they are going to have any chance of reaching the Pro14 final.

He writes: “A brilliant attacking team must be suffocated at source. Two weeks ago Munster contested every lineout, every breakdown and every high ball to keep a foothold in the match. No scenario setting at training can prepare Leinster for these levels of intensity. If they did manage to replicate this they would have no bodies left for the weekend.

“Munster must stop Leinster from playing the game at pace. It starts with a high defensive line - and all the risk that entails - and then it comes down to the messiest place on earth; the breakdown.”

Friday is set to be a dry day in Dublin, with temperatures reaching a high of 17 degrees. Perfect conditions. Edinburgh is also expecting a dry day on Saturday, albeit a slightly cooler one.

1 Jim McGuinness: There is a way to save championship and make it competitive
2 Waterford turn Kilkenny upside down and inside out
3 Waterford’s frenzied waves of attacks too much for Kilkenny
4 Sordid murder of hurling brothers still resonates in south Galway
5 Has Mike Tyson completed the least likely redemption story in American sport?
Real news has value SUBSCRIBE