Henderson’s return a boost for Ulster and Ireland 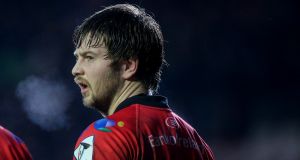 Iain Henderson: has recovered from a finger injury sustained during the victory over Leicester Tigers at Welford Road. Photograph: Gary Carr/Inpho

Iain Henderson’s impressive recuperative powers remain undimmed as his return to fitness is a significant fillip for Ireland coach Joe Schmidt ahead of the Six Nations match against Italy in Rome on Sunday week.

For the second time in as many months, Henderson has managed to recover quicker than anticipated. He was sidelined for five weeks following thumb surgery and then on his return sustained a finger injury in Ulster’s Champions Cup round six pool match victory over the Leicester Tigers last month. The prognosis was that he would be out for several weeks.

Despite missing Ireland’s opening two matches in the Six Nations, providing he comes through this Pro14 game unscathed he will be in contention for a place in the match-day 23 for the Italy match.

Quinn Roux and James Ryan formed a very effective partnership in the win over the Scots – Ultan Dillane made an impressive contribution from the bench – but in the continued absence of Devin Toner (ankle surgery, eight weeks) and Tadhg Beirne (knee), who has only just returned to running this week, Henderson’s availability is a timely boost.

The 26-year-old will partner captain Alan O’Connor in the second row as Ulster seek to put behind them the disappointment of a draw against Benetton in Belfast last time out. John Cooney and Jordi Murphy have been released from the Irish squad to play in a team that offers an interesting mix of youthful promise and experience.

Angus Kernohan is named on the right wing and depending on provincial commitments he may link up with the Ireland side for the remainder of the Under-20 Six Nations. Stuart McCloskey reaches his milestone 100th appearance for the province with Darren Cave alongside him in midfield.

There will be a sense of anticipation as Michael Lowry start his first match for Ulster at outhalf, having previously excelled at fullback. Enrolled in his favoured position, his talent, footwork, range of passing, kicking game and ability to beat players mark him as an effervescent presence on a rugby pitch; the ability to manage the game in the 10 jersey is the next challenge.

Cooney, who picked up a try and two caps in about seven minutes of game time over the past fortnight in the Six Nations, will want to maintain his form on a weekend when Kieran Marmion is set to return from injury and play for Connacht.

Young loosehead prop Eric O’Sullivan has played in 18 of Ulster’s 20 matches this season, an illustration of his development as a player and his physical resilience. The pack contains internationals, Rob Herring, Marty Moore, Henderson and Jordi Murphy, Nick Timoney is at eight with Clive Ross handed a first start this season at flanker.

Ospreys coach, the former Ulster and Ireland hooker Allen Clarke, has endured something of a propping crisis in recent weeks because of injury and international commitments. The club has signed Samoan international Jordan Lay on a short-term contract and he goes straight into the team.

Despite missing eight players because of Test match duty with Wales and Georgia, the Welsh club can still field a strong side and will be hoping to replicate the result from the last time they played in Bridgend instead of their traditional home in Swansea – a bonus point victory over Connacht.

Under Dan McFarland, Ulster are developing a style of rugby that acknowledges their strengths, looking for tempo and width as they don’t possesses the bulk up front to batter their way past teams, particularly in Marcell Coetzee’s absence.

The traditional assertion that forwards win matches and backs decide by how much would point towards an Ospreys win, albeit that Ulster are certainly not without hope but the visitors would need most things to fall their way on the night.