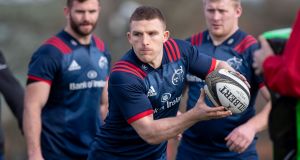 Andrew Conway: has recovered from injury and starts on the right wing for Munster against Southern Kings. Photograph: Morgan Treacy/Inpho

Johann van Graan has been able to call upon a portion of his Irish squad contingent as Chris Farrell, Niall Scannell, John Ryan and Billy Holland were released to the province. Andrew Conway, who had returned to Munster to rehab an injury, is once again fit and takes his place on the right wing in a tasty-looking three quarter line.

Munster head coach, van Graan spent last week with the Ireland squad but now turns his attention to ensuring that the province maintain their lead at the top of Conference A in the Guinness Pro14.

Tyler Bleyendaal switches to outhalf for the first time since his latest comeback from injury, having lined out at inside centre in previous games. He is partnered by talented Garryowen scrumhalf Neil Cronin while up front Athy’s Jeremy Loughman continues his development in the absence of Dave Kilcoyne.

Chris Cloete returns after rehabbing a neck injury sustained against Leinster in December and joins fellow South African Arno Botha and the hugely promising Fineen Wycherley in the backrow.

The 21-year-old, Bantry born, Wycherley, whose brother Josh currently plays prop for the Ireland Under-20 side, has been consistently impressive when opportunities have arisen this season.

The Southern Kings have mustered a couple of wins so far and were narrow 40-36 losers in the South African derby against the Cheetahs last time out. But even against a depleted Munster they are likely to find the going tough in Cork.

The South African franchise does possess oodles of pace and a decent set piece so any complacency from the home side will be punished. Munster have the pack to win ball and the backs to exploit it, making for an irresistible combination that should guarantee a win.

It will be an important evening for several individuals with the likelihood that Ireland coach Joe Schmidt will be looking on as he considers his options ahead of the Six Nations game against Italy in Rome on Sunday week.