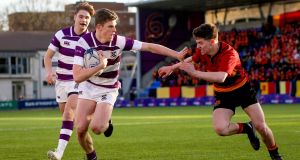 Clinical Clongowes Wood made the most of their chances to wear down CBC Monkstown in the Leinster Senior Cup quarter-final at Donnybrook.

CBC had to strike while the iron was hot, their captain James Reynolds’ beautifully-flighted kick and sweet, simple passing game putting them on the frontfoot.

There were multiple drives by the forwards close to the line with the backs standing idle which eventually went unrewarded.

They didn’t have to apply too much pressure for a penalty to come their way, outhalf David Wilkinson striking for a routine lead in the 12th minute.

Monkstown were competitive at the ruck where flanker Liam Forster earned a penalty.

The kicking of Reynolds and fullback Sean Power kept them in the right area and number eight Tadhg St Ledger-Quinn sliced open the defence.

Their left wing Logan Brady was put into space by two exquisite passes from Reynolds and Power only for centre Joe Carroll to arrive like a train to complete the tackle into touch.

The Clongowes defence was well-marshalled by loose forwards Thomas Gilheany and captain Tom Coghlan until an infringement allowed Eoin Quinn to square it in the 29th minute.

A lack of discipline by CBC cost them another three points when giving up a penalty to Wilkinson from 35 metres with no apparent danger.

Out of nothing, Clongowes wing Luke McDermott retrieved a fine kick by Quinn, chipped over the top and collected for Ross MacGoey and Coghlan to put Gilheany away to the posts for Wilkinson to convert for 13-3 on half-time.

The Clane school went into overdrive up front after the break, creating the momentum for Philips to saunter through unattended, Wilkinson’s conversion making it 20-3 in the 38th minute.

The ability to take whatever came their way was illustrated by Wilkinson’s penalty in the 46th minute.

The confidence was rising and centre Carroll knifed inbetween defenders for the third try.

All of CBC’s approach work paid off when scrumhalf Cian Tallon wrongfooted the fringe defence for Reynolds to convert.

Those centres Phillips and Carroll secured a brace each just to defuse any notion of a comeback.

Clongowes’ supporters greeted the outcome of the semi-final draw, held directly after the match, when paired with Gonzaga.

This leaves Belvedere to play the winners of Blackrock or St Michael’s in the second semi-final.