Manu Tuilagi out for six months with a torn achilles 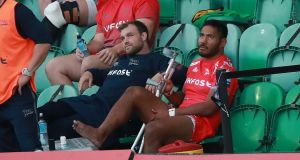 Manu Tuilagi has been ruled out for six months with an achilles injury. Photograph: David Rogers/Getty

England have been dealt a devastating blow after Manu Tuilagi was ruled out of the Autumn Nations Cup and Six Nations by a torn Achilles.

Tuilagi will undergo surgery next week and is expected to be sidelined for six months after suffering the latest setback in a career decimated by a succession of serious injuries.

The 29-year-old centre was hurt when bulldozing out of the 22 from a scrum and landing beneath Dan Biggar as he was tackled in the opening stages of Sale’s Gallagher Premiership rout of Northampton on Tuesday night.

It was an innocuous incident that has far reaching repercussions for Eddie Jones, who must now plan for 10 Tests without his most destructive runner.

Sale director of rugby Steve Diamond insists that with international players set to miss large chunks of next season because of England duty, the loss will be less keenly felt by the Sharks.

“It’s brutal what we’re playing at the minute. Dan Biggar fell on him, so it was an accident. These things happen,” Diamond said.

“I think it might have been a jinx me saying before the game that we’ve got nine out of nine games out of him and boom, that happens. So I’ll keep my trap shut in future.

“Manu will be a loss to England and to Sale. Rather selfishly, after this game and the playoffs, we probably wouldn’t have seen Manu until April anyway with the England commitments and EPS [elite player squad] rest periods.”

Tuilagi was a key weapon in England’s march to the World Cup final last autumn and brings irreplaceable ball-carrying prowess to the backline.

Jones does not have a like-for-like replacement and will be forced to adjust the balance of his midfield as a result, most likely opting for an axis of George Ford, Owen Farrell and Henry Slade.

Jonathan Joseph is another established option who will come into contention when plans are drawn up for the final 2020 Six Nations match, against Italy in Rome on October 31st.

Groin, chest, knee and hamstring injuries have taken a terrible toll on Tuilagi’s career, at one stage restricting him to one replacement appearance in four years.

But he was restored to fitness in time for 2019 and England have profited as a result, most notably at the World Cup in Japan where he played in every match except against Tonga.

A fit Tuilagi is an automatic selection by Jones and he had also made an instant impact at Sale following his summer move from Leicester that was completed in time for the Premiership’s restart.

Despite the prospect of him spending another six months in rehabilitation, Diamond wants to extend his contract beyond the end of the 2020-21 season when his current deal expires.

In an additional blow to England, Courtney Lawes could also be out for some time after damaging his ankle in the same match at Franklin’s Gardens.

Lawes will see a specialist next week when a time frame for his rehabilitation will be drawn up, but his absence is certain to eat into his availability for the Autumn Nations Cup.