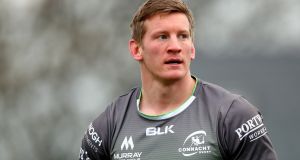 Kieran Marmion’s release from the Ireland squad will afford him some game time ahead of the November test series and is a boost for Connacht coach Andy Friend who is without Bundee Aki, Quinn Roux and Finlay Bealham, all of whom are in Chicago.

Strong winds and heavy rain is forecast on Saturday and that will make for challenging conditions in Galway. David Horwitz makes his first start for the province at outhalf with Kyle Godwin in the centre alongside Tom Farrell.

Colm De Buitléar from the Connemara Ghaeltacht and a grandson of the late filmmaker, musician and wildlife expert Eamon, starts on the left wing on a weekend when his younger brother Eoin, is set to play for an Ireland Under-18 club side against Italy.

On the bench Eoin Griffin is set to make his 100th appearance for the province while 21-year-old prop Matthew Burke and Joe Maksymiw, who joined from the Leicester Tigers, are in line to make their respective debuts in the tournament.

Dragons coach Bernard Jackman welcomes back Welsh international centre Hallam Amos following an absence with a dislocated elbow while Taine Basham, an outstanding underage international, gets his chance to start this match in the absence of Ross Moriarty.

Friend will be hoping for a reaction from his players following last week’s disappointing defeat to the Ospreys, when a poor start and the late concession of a try cost them victory. He admitted: “Our attack is potent enough if we get the ball we want, but if we can’t we have got to adapt.