Johnny Sexton nominated for World Rugby Player of the Year 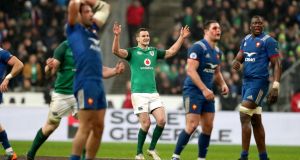 Ireland’s Johnny Sexton has been shortlisted for World Rugby Player of the Year after a season which included scoring a late drop goal to beat France. Photo: Dan Sheridan/Inpho

Johnny Sexton could become the first Irishman in 17 years to be crowned World Rugby Player of the Year after he was nominated as the only northern hemisphere player on the shortlist.

Fans and media have had the chance to give their vote to who they believe to be most deserving of the award and now international captains and coaches will join the panel for one final vote to determine the winner.

Sexton is the oldest of the nominees at the age of 33. The Leinster kicker helped Ireland climb up to second in the world rankings and also claim a first series win over Australia in 39 years.

However, perhaps the standout moment for Sexton was his last minute drop goal to give Ireland a dramatic win in their opening Six Nations match away to France, setting in motion the journey to Grand Slam glory.

If Sexton is to win the award and become the first Irishman since Keith Wood in 2001 to do so he will have to beat some stiff opposition which includes All Black Beauden Barrett who is gunning for the title for a third year in a row.

Barrett has scored seven tries in his eight tests in 2018, six of them in the Bledisloe Cup series against Australia, including a record four amid a 30-point haul at Eden Park and will most likely lineup against Sexton later this month when Ireland meet New Zealand in Dublin.

De Klerk and Marx are the two Springbok nominees after they helped Rassie Erasmus’ side to pull themselves back towards the top of world rugby while All Black Ioane is the youngest nominee at 21.

The award will be presented at the World Rugby Awards at the Salle des Etoiles in Monte Carlo on November 25th, along with the women’s award for which the nominees are: Pauline Bourdon (France), Fiao’o Faamausili (New Zealand), Gaëlle Hermet (France), Safi N’Diaye (France) and Jessy Trémoulière (France).