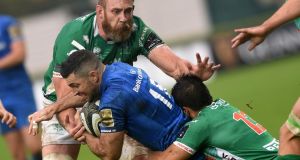 Rob Kearney will be assessed by IRFU medics after suffering a shoulder injury in Leinster’s Pro14 win over Benetton. Photograph: Elena Barbini/Inpho

Rob Kearney faces a fitness battle to be available for the November Test series after sustaining a shoulder injury while on duty for Leinster against Benetton in Italy last Saturday.

The fullback was immediately withdrawn on 46-minutes after shipping heavy contact in a tackle. Leinster confirmed that the fullback “will be further assessed by the IRFU medics this week.”

The province also confirmed that disappointing news that Fergus McFadden will be out of action for four months after suffering a high grade injury to his hamstring in training a fortnight ago. He had a surgical procedure over the weekend.

Dave Kearney returned to training having recovered from an adductor injury.

The Leinster squad depart for South Africa on Wednesday afternoon for next Sunday’s game against the Southern Kings. The travelling party will be heavily backboned by the Leinster A players that won the Celtic Cup.

Inspirational Burke points the way as Dublin clear opening hurdle 16:35
A changing of the seasons as Minella Indo lines up at Wexford 15:40
Lewis Hamilton makes history in Portugal with 92nd GP win 15:45
Celtic slip up again as Aberdeen strike late in pulsating draw 14:40
GAA discourages the use of team buses when travelling to matches 11:25
Here is your handy guide to sport on television this week