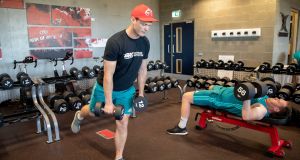 Munster’s Tyler Bleyendaal will captain the side for their Pro14 clash with Cheetahs. Photo: Morgan Treacy/Inpho

There are nine changes to the starting XV that secured a last-gasp win over Glasgow in Limerick last weekend with three Academy players in the matchday squad.

Four changes to the backline see Shane Daly, Alex Wootton, Bleyendaal and Johnston all come into the side.

Mike Haley continues at full-back as Academy player Daly starts on the right wing with Alex Wootton, a try-scoring replacement in the win over Glasgow, on the opposite flank.

Bleyendaal makes his 40th appearance for Munster and features in the Pro14 for the first time since February after undergoing surgery with Sammy Arnold completing the centre partnership.

Alby Mathewson and Johnston combine in the half-backs.

James Cronin joins O’Byrne and Archer in the front row with Jean Kleyn partnering O’Shea in the second row.

Wycherley and Botha are joined by Chris Cloete in the back row.

1 Six Nations: Ireland are contenders but England still the team to beat
2 GAA officials and referees brace themselves as new rules kick in, and this time it's for real
3 Limerick roar from behind to sink Tipp and start league in style
4 Mike Catt hopes to have Irish backs purring in Six Nations
5 Owen Doyle: Creeping professionalism of schools rugby a threat to the game
Real news has value SUBSCRIBE