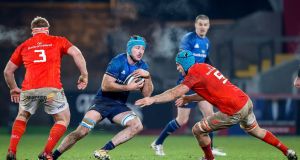 Recurring themes abounded at a frozen Thomond Park after Leinster’s fifth win in a row over their auld enemy equalled the post-war record set in 2009 and 2010, not the least of which was Andy Farrell fretting over Johnny Sexton’s well-being going into another international window.

The Leinster and Irish captain went off before the hour with what seemed a hamstring strain in his left leg although, encouragingly, Leo Cullen said afterwards this was “precautionary”.

Furthermore, Sexton walked off without a limp or in obvious pain and immediately sat on the bench for the remainder of the game without treatment.

It was a similar story with one of his Irish deputies, the Munster captain Peter O’Mahony.

“Pete took a knock early in the game in the neck and took another one on the leg so he was struggling to continue and that was why we made the change,” said Johann van Graan.

“Injury wise, there are a lot of sore bodies, but nothing serious as far as I can make out but I haven’t spoken to the doc yet. We will take stock on Monday with the players who are left here, before we go to Benetton next weekend.”

Farrell, who watched the game along with his newly appointed forwards coach Paul O’Connell, will at least have been grateful that Sexton took no chances, if perhaps less enamoured with O’Mahony staying on until the 67th minute. But they both know their bodies. One senses they’ll be fine.

Otherwise, while it was no classic, it was a very useful outing with the Six Nations in mind, with a host of players confirming their well being, none more so than Conor Murray. Again, sharp in all he did, his running game has returned and his box kicking helped Munster dominate the aerial exchanges, largely through the eye-catching Shane Daly and Mike Haley. O’Mahony, Tadhg Beirne, Chris Farrell all put in good shifts too.

Leinster made 200 out of 213 tackles, James Ryan augmenting two lineout steals in leading the way with 28 followed by Andrew Porter (21) and Rhys Ruddock (19).

Garry Ringrose’s return was a bonus and he grew into the game, even taking over the captaincy when Sexton went off. Alongside him, Robbie Henshaw was arguably Leinster’s best player while Hugo Keenan was another to maintain his form.

For all his trickery and his match-winning finish, Jordan Larmour was given a torrid time by Murray’s garryowens.

“I think you have to remember Jordan is so young as a player, he’s achieved so much already and he has such a positive mindset. Nothing really fazes him. If some time he has a bad day in some part of his game, he’ll be in first thing the following week working away on everything. Players with that type of mindset will just continually get better.

“Jordan will figure it out, for somebody so young he already has a tonne of experience built up. It’s his second game back after being out for 14 weeks out, I think, so overall he’ll get better and hopefully he’s involved with Ireland as well over the next period and we’ll see how he goes.”

Farrell will announce a squad in the mid-30s on Monday morning and Leinster will be bulk suppliers, ensuring a much-changed side for next Saturday’s trek to Llanelli for a meeting with the Scarlets when, conceivably, Tadhg Furlong and James Lowe could also return.

“That’s the exciting part of the week. I don’t know the answer at the moment, but the two lads are getting close,” said Leo Cullen.

“Lowey hasn’t been out that long, but we’ll see how the week pans out. Tadhg trained fully last week, so he’s getting very, very close.”

After Leinster’s most satisfying win of the season, Cullen said: “The way players stood up for each other is probably the most pleasing aspect because you need that sense of fight and team, digging in for each other, particularly defensively.”

In sharp contrast, van Graan was left to lament “the small moments” that went against his team.

“It hurts incredibly,” he admitted. “It not only hurts me, it hurts everybody inside because the one thing you can never doubt with this club is the work they put in, the effort they put in, and unfortunately we feel the 50-50s didn’t go our way. That is rugby and that is life.

“We have got to keep going and the positive part of tonight is that it was a league game. Losing to Leinster is never good enough for Munster. We hope in the next one, whether that is in a final or the normal league game, or a European quarter-final - who knows what is next? - we believe, that hopefully, we can put in a performance that, at that moment, goes our way.”