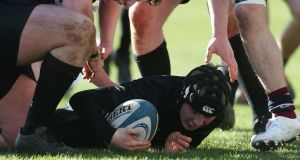 The Belfast school, coached by former Ireland international Brian Robinson and ex-Ulster coach and Worcester Warriors-bound Neil Doak, just had too much for Armagh, coached by former Ulster flanker, Willie Faloon, who were in their first final since 2004.

In a game of small margins, Campbell only put some daylight between themselves and the Royal School with a fortuitous 64th minute try from Rankin after a cruel ricochet ended up bouncing into his grasp though the Belfast school had crucially led 5-0 at the break after Gaskin scored in the final play of a tense opening half.

Still, they secured the trophy with a wondrous score from Davis whose footwork took him round three Armagh defenders with six minutes to go.

It took until the 18th minute before either side had a chance to advance the scoreboard after a high tackle on excellent Armagh centre Matthew Reaney.

But Reaney’s midfield partner Zac Thompson was wide with the wind-assisted long-range penalty.

Campbell’s fullback Conor Rankin then got round the outside of the Armagh defence just before the half hour, but his pass to winger Rex Tinsley was called forward when a score looked possible.

After Armagh had relieved the pressure, they then stole an overthrow with skipper Jack Treanor steaming on into the Campbell 22 only for him to be penalised for holding on.

Again, Campbell responded and after putting a penalty into the corner, in the dying moments of the half, they drove from the lineout before a strong carry by centre Ben Power allowed Gaskin to scramble over.

Rankin’s conversion hit the post and stayed out but that was the last action of the half, giving the Belfast school a 5-0 interval lead.

Armagh immediately narrowed the margin just two minutes after the restart when Thompson landed a penalty after Matthew Reaney’s break brought play up to Campbell’s line.

Rankin then missed a long-range penalty with the wind at his back on 41 minutes and Campbell then held Armagh out on two occasions as Faloon’s side surged for the line.

It was harsh on them that Campbell scored next through the lucky bounce of a rebounded ball through Rankin converted his 49th minute effort to put his side 12-3 ahead.

After a last-ditch tackle by Rankin stopped Reaney from scoring, Armagh won a penalty under the posts which Thompson converted to make it 12-6.

But Campbell then turned the screw with Davis superbly stepping several defenders to dot down under the posts in the 64th minute.

Rankin converted and though Armagh finally worked sub Ben Lavery over in the last minute, it proved too little and too late for College.