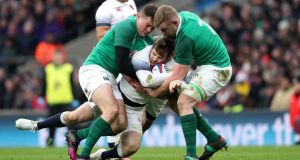 It tells you something of Andy Farrell that those who speak most about the Irish defence coach are the players and the man who talks least about him is Farrell.

Even before last Saturday’s win, the appointment of the former England assistant was lauded one of the best by the IRFU. Farrell’s reputation preceded him.

Although Farrell took flak after Wales and Scotland, Twickenham was a triumph with the coach’s influence at its most visible.

“Andy Farrell gives us all the tools during the week and we just need to go out there and perform for him,” said CJ Stander before the final game.

“He is a very passionate man. We want to go out there and show that we can defend the way we want to, defend for the team and for him.”

After the England match Farrell’s name emerged again, this time from outhalf Johnny Sexton, highlighting what everyone had witnessed; an England team in full spate for eight intense minutes after half-time with Ireland holding solid.

“The defence was incredible,” said Sexton. “We made Andy proud on the first day back in Twickenham for him. I’m sure he’s proud to be part of that effort. We saved our best performance for last.”

Having forged a reputation with Saracens and England, Farrell was appointed Ireland’s defence coach in January 2016 but did not take up the job until June following a short-term role with Munster.

From the outset his detail in defending has dovetailed perfectly with the thinking of Joe Schmidt. Convinced about the quality of tackling, perfecting the right technique and performing it with an aggressive, offensive tempo, Farrell has fortified Ireland’s defence with belief.

Much of what he has achieved was built on what Les Kiss had done before and, like Kiss, his thinking is influenced by Rugby League. But Farrell also arrived with a big personality and a playing record of achievement in two codes that also commanded regard.

“You have to build,” he said a few months after his appointment. “You can’t go in gung-ho because if you try to put too much detail on things then the team don’t understand. One of the main points is you have to make sure there is clarity.”

A keystone with Ireland is for the defensive line to have width and for players to advance in a straight line or square so they can defend both ways and tackle with the body rather than an inside arm. The line speed is also important. It is speed with alignment.

Much of Ireland’s match winning defensive play against England took place in the second half, where Eddie Jones’ side claimed 66 per cent of possession and played in Ireland’s half of the pitch 71 per cent of the time.

But perhaps more than numbers and match stats, Farrell has front loaded Ireland with conviction and trust in a system welded together by agreed personal and collective responsibilities.

And because of his strong leadership and commitment to what he’s doing, Irish players have not struggled to follow.

Fullback Rob Kearney and right wing Keith Earls both had eye-catching defensive games with outside centre Garry Ringrose cleverly stripping the ball twice from English players, one of them from lock George Kruis.

They knew what they had to do. They knew how to do it. They went out and did it. It was no wonder Sexton was name-checking the one time Great Britain rugby league captain.