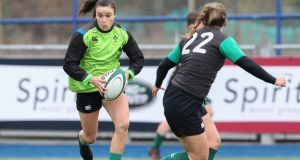 Louise Galvin: returns to the starting Irish XV for the game against England. Photograph: Gary Carr/Inpho

Following a fleeting appearance off the bench in their defeat to Scotland last Sunday, Louise Galvin replaces Kim Flood in the Irish back-three. The Kerry native’s selection sees Hannah Tyrrell switching to fullback in a game that will act as a curtain-raiser for an U-20s encounter between the same two nations.

Paula Fitzpatrick has moved to the second row to accommodate Ashleigh Baxter’s inclusion at blindside flanker, where she will line up alongside Claire Molloy and skipper Ciara Griffin.

Nicole Cronin has also been named at scrumhalf for her first start since last year’s World Cup campaign. There is a welcome return to the replacements bench for Railway Union’s Ciara Cooney, who injured her ankle in the opening round loss to France at Toulouse.

Despite accepting they are underdogs heading into this round five clash with the defending champions, Griggs wants his side to play the game on their own terms.

“The biggest thing is probably putting some of the things we’ve spoken about into action. Looking at some of the other games and within camp, a lot of our messages would be the same. But when you talk about something and talk about doing it, but don’t actually do it, that’s probably where we need to make sure we’re at our best,” Griggs said.

“I just want to see us really give it to England and we’re certainly the underdogs in this, so we’ve got nothing to lose. We have to show that we’re better than what we were last week and more so the week before against Wales [a 35-12 victory].”