‘Looser’ French game could be a risk to Zebo, says Murray 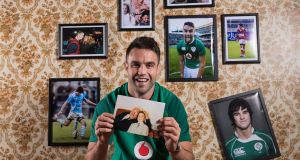 Ireland and Munster scrumhalf Conor Murray at the launch of Vodafone’s “Who We Are is How We Play” campaign. Photograph: Dan Sheridan/Inpho

A mischievous glint comes into the eye of Conor Murray when he talks of Simon Zebo and the possible devastation baguettes and croissants could cause the wing and fullback when he moves to France.

But Murray’s close friend has drawn focused attention on the possibility of making the move at a relatively young age. Although the IRFU has made the Irish players understand both sides of a hard transaction and it is very simple, bigger wages or the green shirt, moving is never far from players’ thoughts.

Murray’s contract ends after the next World Cup and there is no doubt in his mind that the decision to play rugby abroad will be a consideration as the wage gap grows between Ireland and France.

Even Luke Fitzgerald, in suit and tie, popping in on his lunchtime from his office near Aviva Stadium, to say hello to Murray would have reminded the Munster man that life after rugby means normal work. In Fitzgerald’s case also how injury can wreak havoc on a promising career.

But the prospect of taking a few years out and then returning has become a lifestyle and career move that Zebo’s decision has legitimised and made more attractive. The direct line from France that Zebo will have with Murray over the next few years could have some bearing on what decision the Irish scrumhalf will make after the Tokyo World Cup.

“I’m not always thinking about it,” says Murray. “But you are definitely aware of the draw towards something like that. People talk about it all the time and now Simon has gone and done it.

“It’s an interesting and nice option to be able to go and play in a country like that, whether you go down to the south of France or to the UK. Those options are there and they are good things.

“Obviously Johnny [Sexton] went when he was a little bit older. He came back and played international as well and continued to play but, yeah, over the last couple of years the likes of Marty Moore, Mads [Ian Madigan] and Donnacha Ryan have gone.

“These guys, they’re a younger profile than the lads that have gone before and that’s probably the concern for the IRFU that if that starts to happen that more and more people want to do that and then their heads will be turned at a younger age.”

Murray was speaking before yesterday’s Irish squad omitted Zebo in a savage interpretation of the IRFU ruling on overseas players. Schmidt has left out Zebo and included players who are not yet certain of their places at provincial level. Cold and ruthless, this is the hardball game the union are playing for survival.

But Murray is sticking with his Munster blood brother and he believes, unlikely as it now looks, Zebo should be given the opportunity to play with Ireland after his move to France.

“From my own selfish point of view, I’d like to see him being picked to play,” he says.

There is a reasoned argument on both sides and while the IRFU needs leverage to hold players such as Garry Ringrose, Joey Carbery, Tadgh Furlong or James Ryan from six-figure salaries, the finger can be pointed at residency players.

While Zebo has played his entire rugby career in the Irish system and is now shut out of Schmidt’s squad, players who had never played in Ireland have again been picked by the coach after living in the country for three years.

Residency players Bundee Aki and CJ Stander are both included in Thursday’s Irish panel. The number of years is soon to change to five but for now unfairness appears to be built in.

“It is strange to look at it, definitely,” says Murray. “I don’t know if it’s right or wrong. I’m sure the guys who have moved abroad will be a little more annoyed. It’d affect them more.

“Say Zeebs – and he doesn’t get picked, but a 15 comes in, becomes a resident and plays for Ireland . . . that could be hard for Zeebs to take, watching and thinking ‘that could be my Xth cap’, but I can’t get it now.

“I think it’s just the way it is. It’s a weird issue. I think the five-year thing is a good thing. It makes it a bit more wholesome. You earn it a bit more.”

For Zebo now the die is cast. Murray understands what makes him tick and in France where structures are not as tightly controlled, Zebo, who has had to work hard to reach the level he is at and often against his nature, could find himself-regressing.

“With him is it a bit of a risk? Yeah, with the baguettes and the croissants,” jibes Murray.

“Just from speaking to Dave Foley or Paddy Butler, who went to Pau recently, the structure of your week is more relaxed. Some days you mightn’t be in until two and if you want to do the gym, you come in before 2pm and do it yourself.

“Whereas at Munster, you come in, you are on your app, you do all your scores and then you do your mobility, your gym, you go to your meeting. It is all laid out for you. We are like sheep, basically. In France, it is a bit looser. It would be a risk.”

That’s the way he plays. That’s the life he has chosen. Risk for Irish player is on the table.