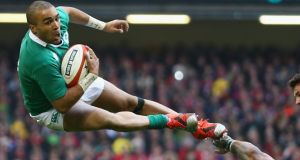 Simon Zebo: the fullback has announced his departure from Munster, almost certainly to Racing 92, and this may mean he will be excluded from the Ireland squad. Photograph: Michael Steele/Getty Images

This will tell a tale. As Simon Zebo’s departure from these shores at the end of the season, almost certainly to Racing 92, still reverberates, if the Irish squad for the forthcoming Guinness Series is unveiled on Thursday in alphabetical order, we will all be scanning straight to the bottom.

Then we will discover if Zebo’s decision to turn down a new contract from Munster will mean his immediate exclusion from the Ireland squad. Joe Schmidt and his assistant coaches went into conclave on Wednesday, themselves only having been made aware of Zebo’s intentions last Monday.

The 27-year-old has won 35 caps for Ireland, playing in all bar two of Ireland’s 12 Tests last summer: the November game against Canada and the second Test in Japan. With Rob Kearney having played little rugby this season, and Jared Payne none at all, Zebo is the form fullback in the country, allowing for Joey Carbery making a decent and sometimes brilliant fist of the role at Leinster.

Thus it may be a case of using Zebo while he is still within the IRFU system and payroll. The alternative, for the first of those games against South Africa, would otherwise be to gamble on Carbery or Andrew Conway, who was capped in both Japanese Tests and started the second at fullback.

Indeed, with Dave Kearney and Craig Gilroy not having played enough to be in the frame, and age counting against Tommy Bowe and – as well as form – Andrew Trimble, the outside backs are liable to see a surprise or two anyway.

Jacob Stockdale’s has risen further with his try-scoring exploits this season alongside Charles Piutau, to augment his two caps on the summer tour, that he may even start against South Africa, thus seeing razor-sharp Keith Earls shift to right wing. O’Halloran and Conway should feature, while Darren Sweetman and Barry Daly are also on the radar.

The squad is expected to number around 35 to 37 players. Schmidt and co will not be too experimental against Fiji, who have risen above Ireland’s third opponents Argentina to ninth in the world rankings and are expected to arrive at full strength, with Leone Nakarawa, Nemani Nadolo et al, after summer wins over Italy and Scotland.

Nonetheless, with the planning for the 2019 World Cup having begun on last summer’s tour to the USA and Japan, where Ireland played two Tests, some of the eight players capped on that tour are liable to feature.

In addition, the midfield options have been reduced without Garry Ringrose, as well as Payne, and Robbie Henshaw’s shift to outside centre with Leinster could be a precursor for the November Tests. Inside him is liable to be the newly eligible and uncapped Bundee Aki, thus renewing their potent Connacht midfield partnership, or Stuart McCloskey, capped once against England two seasons ago, or Rory Scannell, who featured in all three summer Tests. Chris Farrell is pushing for inclusion if five midfielders are named, but Luke Marshall is probably still ahead of him in the pecking order.

The choice of back-up to Johnny Sexton is complicated by Paddy Jackson’s absence, and while Carbery can fill that role, it could be that Ian Keatley’s revitalised form may see him named.

Likewise, having made his debut off the bench in the second Test in Japan, John Cooney’s regular rugby and good form at Ulster could see him elbow his way in alongside, or ahead of, Kieran Marmion and Luke McGrath.

With Rory Best making a timely return, and in light of Niall Scannell’s misfortune, the three hookers would appear to pick themselves – ie the captain, James Tracy and Seán Cronin – and ditto the looseheads, Jack McGrath and the rejuvenated in-form duo of Cian Healy and Dave Kilcoyne.

The options in the secondrow have been reduced by Donnacha Ryan’s departure to Racing, and, along with Iain Henderson and Devin Toner, it would be no surprise if James Ryan, also capped in the summer and impressive against Montpellier, muscles in alongside the likes of Quinn Roux and Ultan Dillane.

Cue the ever-competitive backrow area. Last season, no less than a dozen loose forwards featured in the 12 Tests, although here the options have been reduced by the absence, for the first time in aeons, of the previously indestructible Jamie Heaslip, and now also Josh van der Flier. The expectation is that the 24-year-old has suffered another ill-timed injury, and may require an operation on his ankle.

Peter O’Mahony, Rhys Ruddock (captain in all three summer Tests), Seán O’Brien, CJ Stander and Jack Conan, who started all three tour matches in June in the absence of Heaslip and Stander, all looked nailed on. If there is to be another one or two backrowers, Dan Leavy and Jordi Murphy appear to be above Tommy O’Donnell in the pecking order.

Although O’Brien has only played one game this season due to a calf problem, he has resumed training this week and is expected to start for Leinster against Ulster in Belfast on Saturday.

Three new kids on the block

Jacob Stockdale
The Under-20s star has made a seamless transition to the pro ranks, backing up his nine tries in 18 games last season (10 off the bench) for Ulster with a try-scoring debut against the USA, and also played in the second Test in Japan. Revelling alongside Charles Piutau, he has scored in each of his five starts for Ulster this season. Big, strong, quick, he makes things happen, and, with a seemingly innate reading for the game, things have an uncanny habit of happening for him.

Bundee Aki
The New Zealand-born and reared ex-Waikato Chiefs star qualifies this autumn through the three-year residency ruling, and by all accounts made a good impression when called up for an Ireland training camp in Carton House last August. He has looked rejuvenated this season and it looks like his old Connacht midfield combination with Robbie Henshaw might be revived at some point next month.

James Ryan
Another off the remarkable St Michael’s production line and another star of the Ireland Under-20s, whom he captained, such is the esteem in which Joe Schmidt holds him that Ryan, then 20, made his debut against the USA (scoring a try almost immediately) before his Leinster debut. Four appearances for his province have followed, including an impressive Euro debut against Montpellier.